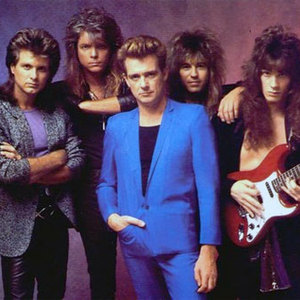 Chris Impellitteri formed Impellitteri in 1987 together with Rob Rock as vocalist. That year, they released an EP called the black album. The selftitled EP was well-received, and Impellitteri regrouped, this time with Graham Bonnet as lead singer, and release the full-length album Stand in Line in 1988.

After some touring and label deals, Impellitteri returned (again with Rob Rock on vocals) with Grin And Bear It in 1992. The following year, they released another EP titled Victim of the System. In 1994, they released Answer to the Master.

In 1996, Impellitteri released Screaming Symphony, which has become one of the most acclaimed albums of the band. In 1997 they released yet another EP titled Fuel for the Fire, in preparation for their next full-length album. The next year, they released another of their most acclaimed works: Eye of the Hurricane. They followed it in 2000 with Crunch.

Shortly after, Rock decided to pursue a solo career so Impellitteri recruited Graham Bonnet again, and started working on his next album. In 2002, they finally released System X. That year, they also released a compilation of hits called The Very Best of Impellitteri.

The union with Bonnet would be short-lived as they parted ways some time after, and Impellitteri recruited Curtis Skelton, finally releasing Pedal to the Metal in 2004, one of their most aggressive albums to date.

Chris Impellitteri is currently working with an LA band (as a member, not leader) and has announced that they will release a new album soon.

Chris Impellitteri has been ranked together with Deicide drummer Steve Asheim and bassist Adrian Davison as perhaps the fastest musicians on their respective instruments.


The band is currently on hiatus as Chris recently joined a Los Angeles band, and is working with them on a new album.

The Nature Of The Beast

Pedal To the Metal

The Very Best Of Impellitteri: Faster Than The Speed Of Light

Faster Than The Speed Of Light