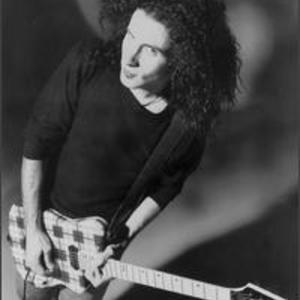 Blues Saraceno is an American rock guitarist and music producer from Connecticut. One week after Saraceno's 16th birthday his professional career started when his then manager sent a demo tape to Michael Bolton who decided to enlist Blues' guitar skills on a Cher song. That late night session which included songwriter Desmond Child resulted in a release on Cher's 'Heart of Stone' record. Word quickly spread and other producers soon followed suit.

A demo tape that was originally intended to secure a guitar endorsement ended up in the hands of "Guitar for the Practicing Musician", magazine which had been searching for a full year to find the right artist to launch their new record label. Upon hearing his tape, Blues was offered the record deal, and his first instrumental solo record (Never Look Back) was released to critical acclaim. He made three instrumental guitar albums circa 1987 with the Guitar for the Practicing Musician magazine, they were released in 1989, 1992, and 1994.

Saraceno was discovered by Guitar for the Practicing Musician magazine, which assisted him in releasing instrumental recordings on an independent basis. Saraceno also produces for some artists, such as Scott Caan of Dallas 362, Eric Balfour of Fredalba, Lindsay Price's solo releases, Anthony Michael Hall, Brad Cohen of The Woods, and Brian Price, and has composed music for many famous television shows and movies, such as Friends, The Osbournes, and more.

In 1994, he filled in as lead guitarist for Poison, after guitarist Richie Kotzen was fired. Saraceno recorded guitars on the Poison album Crack a Smile. However, he was replaced again upon the return of the band's original guitarist, C.C. DeVille. The album was later released with under the name Crack a Smile... And More, and features fifteen tracks recorded by Saraceno, as well as five song taken from the band's old recordings featuring DeVille.

In 2002, he founded the band Transmission OK, in which he played guitar, sang and wrote the songs. "I never set out to be a guitar hero", he wrote in his personal web page (www.bluessaraceno.com) in reference to the full range of duties he did on that album.

Saraceno also has a signature made Trembucker Pickup made for him by Seymour Duncan.

The Devil You Know (EP)