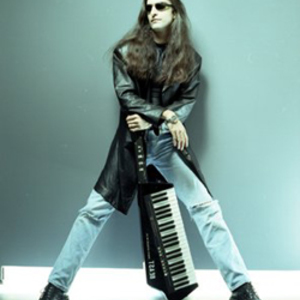 Andre Andersen was born on December 16th in Moscow, Russia. He studied piano since he was 5. He is a mix of Danish and Georgian Royal blood and is a musical genius who can virtually play any instrument, compose, write lyrics and produce all at the same time. At the age of 14 Andre discovered a different genre of music aside from classical, by accidentally getting Deep Purple's "In Rock". From that point on, he started to combine his classical chops with the rock form in every piece of music he writes.

Andr? speaks of Mozart and Paganini's work as his biggest inspiration aside from people like Rick Wakeman and Jon Lord, who invented the "rock approach" to the keyboards. His musical influences are mainly the classics and the rock/hard rock scene that he studied and grew up with. Lyrics come easy to a guy who can read fifteen books in two weeks. In 1984 he moved to Denmark. After awhile he built his own working place - Mirand Studio (now expanded and removed to a recently established North Point). Having an opportunity to record all of his ideas without watching the clock, he started to create a whole set of compositions and songs where the elements of classical music, progressive and straight hard rock were mixed to create a unique signature sound. Andre reinforced and polished his "invention" by working with countless projects until the day when ROYAL HUNT was formed and the final pieces - the music and musicianship of every individual - would fall into place. All of this makes Andre a powerhouse force that drives the entire ensemble forward like a bulldozer.