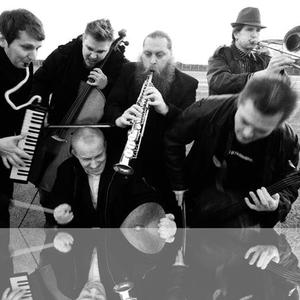 The Finnish band Alamaailman Vasarat, which translates to "the Hammers of the Underworld" in English, create music influenced by Klezmer and other forms of European folk music and play it with the ferocity of a punk or metal act. Abandoning major keys for the most part and guitars all together, the group performs on such instruments as a pump organ, saxophone, and distorted cello. Although the basic rhythms the band uses are conventional polka and bossa nova, by speeding them up and adding primal drumming, their intense music has been known to even inspire stage diving.

Alamaailman Vasarat was formed in 1997 as a side project by two members of the avant-garde progressive rock band H&ouml;yry-kone: Teemu H?nninen (drums) and Jarno Sarkula (flute, soprano sax, bass). Adding H?yry-kone member Marko Manninen on cello, pump organist Miikka Huttunen, and trombonist Erno Haukkala, the group worked on writing and arranging material in 1998. Later that year, they produced a soundtrack to a short film. In 1999, they began live shows which were surprisingly well-attended and dramatic affairs. Their debut album, Vasaraasia (2000), sold quite well on the European world music market.