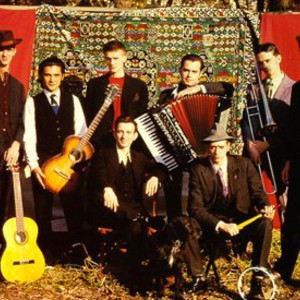 Les N?gresses Vertes, formed in 1987, are a French music group who are best described as a fusion of world music and some aspects of alternative rock. Their particular musical influences were Gypsy music, Punk rock (Gypsy punk), Algerian ra?, Mediterranean and South American music and French caf? music. Their tracks often feature acoustic guitar and accordion, as well as some tracks containing many other 'traditional' instruments such as piano and brass.

Their tracks often feature acoustic guitar and accordion, as well as some tracks containing many other 'traditional' instruments such as piano and brass. Their style is fairly upbeat and energetic on the majority of their tracks, with unusual rhythms, vocals delivered with a generous dose of zeal and vibrant energy, and accompaniment melodies ranging from lilting and distant to eccentric and fast-paced. These two factors give many of their pieces a strong sense of direction.

The original members were a group of friends, many of whom had not played their instruments before forming the band. The group's name translates as "green black women"; it arose from abuse hurled at them at one of their first concerts. The insult is a comparison to the kitsch art of Vladimir Tretchikoff. They were initially signed to the independent Off The Track label, and released the punk protest song "200 Ans D'Hypocrisie" in response to their country's French Revolution bicentennial celebrations[1].

In 1989 they released their first album, Mlah, to good reviews in both France and the UK, where the single "Zobi La Mouche" just failed to reach the charts and where they toured and played the WOMAD festival. They also made a controversial tour of Lebanon. Their second album, Famille Nombreuse, in 1991, featured new drummer Z? Verbalito.

Helno was by this time struggling with serious heroin addiction, and St?fane Mellino and Canavese replaced him as the main songwriters. Helno died at his parents' house on January 22, 1993.

Several members left the band after Helno's death, but Les N?gresses Vertes continued around the nucleus of Mellino, Canavese, Ochowiak and Paulus. In 1995 they released the album Zig-Zague, followed by the live album Green Bus. By 2000's Trabendo, the group's style had shifted to a dub oriented lounge style.