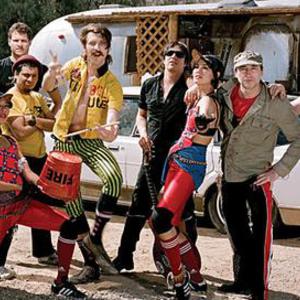 Combining elements of punk, gypsy music, and Brechtian cabaret, Gogol Bordello tells the story of New York's immigrant diaspora through debauchery, humor, and surreal costumes. Leader and singer Eugene H&uuml;tz's taste in music was spun out of black-market tapes of the The Birthday Party and Einst&uuml;rzende Neubauten in his native Ukraine. After being evacuated to Western Ukraine in 1986 following the Chernobyl disaster, H?tz became enamored of the mystical, outsider qualities of gypsy music.

After being evacuated to Western Ukraine in 1986 following the Chernobyl disaster, H?tz became enamored of the mystical, outsider qualities of gypsy music. Living as a refugee in Poland, Hungary, Austria, and Italy before moving to the United States in 1993, he experienced life as an outsider himself.

After arriving in New York, he teamed up with guitarist Vlad Solofar and squeezebox player Sasha Kazatchkoff. American Eliot Fergusen added a strong rock sound on the drums and the band was also augmented by Sergei Riabtsev on fiddle, a former theater director from Moscow whose past experience would prove helpful in the future in crafting Gogol Bordello's bizarre stage shows (like one which tells the story of super-powered immigrant Ukrainian vampires).

The group's early gigs involved playing straight gypsy music at Russian weddings, but their music soon evolved into the hyper-kinetic explosions that earned them a solid following amongst New York's downtown hipsters. The band issued a single in 1999 entitled gogol bordello, quickly followed by their debut full-length, Voi-la Intruder, which was produced by Nick Cave & The Bad Seeds' drummer Jim Sclavunos. Solofar and Kazatchkoff were replaced by accordionist Yuri Lemeshev, who hails from the Russian island of Sakhalin, and two Israelis, guitarist Oren Kaplan and saxophonist Ori Kaplan, who despite their similar names were not related.

H?tz helped bolster the band's popularity by becoming somewhat of a celebrity in the downtown scene, in part fueled by his Thursday night DJ gigs at Bulgarian club/restaurant/bar Mehanata, where he played Ukrainian, Gypsy, ra? and flamenco music for a crowd of artists, models, Ukrainians, Russians, Gypsies, and Bulgarians with tendencies toward exuberant dancing and smashing plates. In the spring of 2002, Gogol Bordello embarked on a European tour and performed as part of the Whitney Biennial, bringing their music to a whole new audience.

In 2007, the band released their fourth studio album, Super Taranta!.

The members of Gogol Bordello have also made appearances in film. In 2006, their song "Start Wearing Purple" was featured in the film Everything Is Illuminated (starring Elijah Wood and Eugene H?tz), bringing their music to an even broader audience throughout the US.

Gogol Bordello all appeared in Madonna's first short film as director, Filth and Wisdom. Eugene H?tz is to play one of the lead roles. The band have contributed three original songs to the soundtrack.

Their music was also featured in the film Wristcutters: A Love Story and the character of Eugene was based on and partially written by Eugene H?tz.