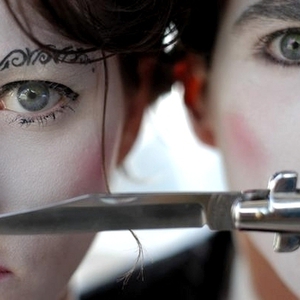 The Dresden Dolls are an American musical duo from Boston, Massachusetts, USA. Formed in 2001, the group consists of Amanda Palmer (vocals, piano, ukulele, toy piano, harmonica) and Brian Viglione (drums, percussion, guitar, vocals). They describe their heavily art-damaged and theatrical style as "Brechtian punk cabaret", a phrase invented by Palmer because she was "terrified" that the press would invent a name that "would involve the word 'gothic'," and are part of an underground dark cabaret movement that started gaining momentum in the early 1990s.

They describe their heavily art-damaged and theatrical style as "Brechtian punk cabaret", a phrase invented by Palmer because she was "terrified" that the press would invent a name that "would involve the word 'gothic'," and are part of an underground dark cabaret movement that started gaining momentum in the early 1990s.

Palmer accompanies her confessional story-songs with a thunderous and shimmering piano style that rests on the shoulders of Jerry Lee Lewis and Nina Simone. Viglione's jazz and hardcore-influenced drumming and creative percussion are the perfect foil, providing in turns a delicate cradle of rhythm and a piercing bed of nails onto which Palmer lays her raw, tragicomic lyrics.

The release of their debut album The Dresden Dolls, produced by Martin Bisi (Swans, Sonic Youth), has won the band accolades from both mainstream and underground media, and it appears that the Dolls are poised to transcend cult status and smash all commonly held ideas about what a rock band is supposed to be. Their awe-striking live energy and singular look has earned them opening slots for Nine Inch Nails, Beck, the B-52s, Jane's Addiction, OK Go and Panic! At the Disco, a tour with the Legendary Pink Dots, and a victory in the 2003 WBCN Rock and Roll Rumble.

Their second album Yes, Virginia was released in 2006, eventually followed by a companion record No, Virginia in 2008, which features b-sides and out-takes from the "Yes, Virginia" sessions, as well as a smattering of new tracks.

At the end of summer 2008 they announced a hiatus. The band has made further announcements saying they will reunite when the time is right for both of them, and have stressed they have not broken up.

In September 2008, rumors began to circulate about the future of the whole band. Viglione confirmed that the band is currently on hiatus but emphasized that he and Palmer are on good terms and that they will get together again when it feels right for both of them. In late July and early August 2009, a rumor began to spread that the band was "reuniting for performances in 2010" but Palmer clarified in her blog on August 7: "There's been a ton of press lately re-printing an old quote from an old interview that's now blown up into a full-fledged press rumour that Brian and I have planned Dresden Dolls' shows for 2010. Not true. We aren't planning any shows. Sorry about that, blame the gossip whores."

In 2010, a reunion tour to selected venues in the United States occurred. It started on Halloween in New York City and ended in San Francisco on New Years Eve.

The Dresden Dolls played a show in Mexico City on 9 December 2011. They had a tour of New Zealand and Australia in early 2012, supported by The Jane Austen Argument and The Bedroom Philosopher.