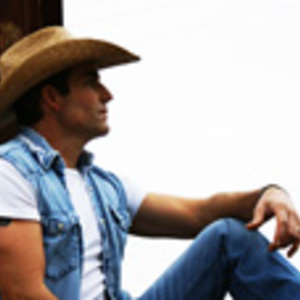 Jason Meadows had two huge loves as a kid, and both still have as much pull on him today as they did back then growing up in Oklahoma. He spent his time working the land on the family ranches, riding rodeo, or making music, and the former "Nashville Star" contestant still loves the stage and the open range with equal fervor. The title of his last album, 100 PERCENT COWBOY is a perfect description of Jason: a straight-shooting, no-nonsense...

It's been quite a ride for the talented, handsome singer whose looks are reminiscent of old-time, silver-screen, cowboy heroes like Gene Autry and Roy Rogers. Jason officially launched his musical journey over 15 years ago when he moved to Nashville to pursue a full-time career as a singer, but the story actually starts much earlier than that. Growing up splitting time between both his paternal and maternal grandfathers' ranches, he had lots of time to hone his skills as a guitar player and singer. "I started playing guitar at six," recalls Jason. "I believe it was in my blood from my mama's side handed down from my grandpa. Before that even I would play tapes and sing, and just loved traditional music. We had eight-track tapes and I would sit on top of the tape player and put tapes in and out of it ... Conway, Merle Haggard, Ray Stevens, Hank Sr. Loretta Lynn, Tammy Wynette, all that great, old music. My mom's father was my biggest music influence ...he played fiddle and harmonica and we would all sit around and play for hours."

As a kid Jason also joined the Oklahoma Youth Rodeo Association, and traveled all around the state competing. His love of rodeo eventually dovetailed into his second love, music, by way of the Roundup Club, where he would go and watch the bands after the rodeo. "I loved rodeo. I traveled all over the place team roping and calf roping and riding, and after high school I was riding bulls and even started my own buckout. Every Friday we would buck bulls down there. It was a cool deal and a big draw every Friday night," recalls Jason. "But music was where my heart was. And I would go after the rodeo in Durant to the Roundup club and play music. I wasn't old enough to be in there, but I would go and play. And the same band I listened to, I eventually became the lead singer of at 16. Roger Springer is a friend of mine, and he played with that same band too, so I was kind of following in his footsteps for awhile. It was the Rowdy Country Band I played with, and that's the name of my band today. It was a great time!"

Later Jason joined another band, Heart Talk, and began playing regionally all around the Southwest. He began receiving encouragement from all sides to make the move to Nashville but when a famous fellow Oklahoman gave him the thumbs up, he finally got the push he needed to move to Music City. "Reba McEntire's family had heard me on a tape and she sent somebody out to hear my show. I met with her and it was a key under the mat kind of deal...she encouraged me to just do it and make the move, and that was a big step for me. Moving and giving up everything with a wife and new baby and leaving to come to Nashville was hard but she helped me so much. They gave us a place to live in a duplex she owned on Cherokee Dock and I got a construction job lined up and made the move."

A few years after moving to Nashville, Jason began writing songs, and was soon recording an independent project he planned to shop around for a record deal. When Sony heard the album, the label approached him about auditioning for the television talent competition "Nashville Star." Jason auditioned and appeared on the third season of the show and built quite a fan following, although he didn't win first place. He later recorded an independent project with Baccerstick Records, which was released in 2007, and included the tearjerking single, "Eighteen Videotapes." Jason penned the poignant tune about a dying father's messages to his child via videotape, which struck a chord with listeners.

Following his Baccerstick venture, Jason regrouped and reevaluated his career path, and found he needed to refocus his energy on making the kind of country he grew up on and loved. He recently returned to the studio to record his new project on Rosalito Records, and penned half the songs on his upcoming new independent project, which is due out later this year. The new collection features barnburners like the fun, rowdy "Sin Coming On," and the sweetly patriotic ode to the Lone Star state, "Ain't Never Been To Texas," which Jason feels is a moving anthem to the part of the country he loves most. He's excited to be making music his way, and feels this new project is the most true and honest reflection of who he is as an artist yet.

"This album is really a big step for me. It's all about me...when you hear it, you're getting Jason Meadows, you know. And I wanted to country it up a little bit this time around. I wanted to produce on this record, and everything about this record I've had control over. I picked the songs, I wrote the songs, I picked the players. Robby Wilson and Jamey Perrenot produced it for me, and they've worked with me for a long time and know me so well. I'm real excited about it - it's straight-up country. I think country music today has gotten away from that a little bit. Country has gotten so pop...there's a whole void there for good, traditional country. That's the thing I'm shooting for. There's a mix for everybody on this record. I wanted to get that traditional sound back in my record. I want to be the guy who comes along and puts country music back on the radio. That's what I'm hoping to do with this new album."

You Ain't Never Been To Texas