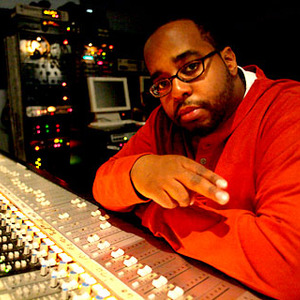 J-Live was born and raised in Uptown Manhattan, New York City. After making a home for himself in Brooklyn upon graduating from SUNY at Albany, J relocated to Philadelphia in 2003. "Moving to Philly was more for the family than any kind of career move. But the whole music scene here and the hip hop community here have embraced me with open arms since I arrived. I've gotten a lot of support from so many different artists and dee jays. This city is jam packed with talented and beautiful people."

J-Live started his career by releasing solid 12" such as "Longevity", "Braggin' Writes", and "Hush the Crowd", which earned him a spot in The Source's "Unsigned Hype" column.

Recorded mostly at J's own Triple Threat Studios in Philadelphia, The Hear After actually seems to have taken on a life of its own. Guest vocalist on the album, include up and coming artist, Kola Rock, Cvees, and the soulful sounds of Virgin recording artist, Dwele. The album features production by Floyd the Locsmif (Atl), Hezekiah, James Poysner (Philly), Probe DMS, Fire Dept., (NYC), Oddisee (DC), and J-Live himself. "The title is a play on words. People think of the here after as the after life or somewhere you go when you die. Like heaven or hell. Me personally, I see heaven as being at peace with yourself while you're alive. I see hell as the path you choose in life as opposed to a place you go after death. The album is called The Hear After because I'm at peace with myself musically, and I've been through hell to get that way. This is what you "hear after" all that has transpired so far. This is what I've been working to accomplish since the last album."

Like J's last two full length records, The Best Part and All of the Above, The Hear After covers a wide range of thoughts and emotions both musically and with its subject matter. "If you were to look at the whole thing, you would see a story line about an artist trying to maintain and expand his career and still be there for his family. That was the biggest struggle while making the record, and its no coincidence that it's a theme that becomes obvious listening to it. But there are songs about almost every aspect of my life from growing up in the city, to raising kids, touring heavy, building and teaching, politics, party and bullshit. I can't just spit about one thing for a whole record. That's not my style."

J-Live has been rhyming and mixing since the age of 12 but he has made much more of a name for himself as an MC than as a DJ. "I definitely focus on rhyming more. Growing up doing both it was easier on the pockets to be an MC. Records and equipment can get expensive. But I love spinning." One of the highlights of his entertaining live show is when he rhymes and beat juggles on the turntables simultaneously, performing his classic, "Braggin' Writes." J-Live is also known to produce beats.

J-Live has always used music to get his messages across. He explains, "I grew up listening to everything from BDP to Nwa, to PE [Public Enemy], Slick Rick, Big Daddy Kane, Nice and Smooth. Whether the music was pimped out, gangsta, militant or whatever, rappers had something important to say to kids like me. And I listened intently. As a 5%er, I can't imagine how much of an influence hip hop had on the way I see the world."

Case in point, J's favorite song on the album, "Audio Visual" is so descriptive it's a song "in 3-D". From the quirky, key accents to the thick-ass bottom running throughout the song, J-Live paints a colorful, picture of his life on and off the mic. "Brooklyn Public" is his ode to his days as an educator. Earlier in his career, J-Live taught middle school English/Language Arts in Brooklyn for a few years.

Making music for the walkmans as well as the Jeeps, J-Live made a mature, sonically sophisticated album. "I feel like I represent hip hop's middle class. Seems like everybody's either crying broke or screaming rich or both. I try to speak to the people in between. The everyday hard working fun loving hip hop heads."

How Much Is Water?

All Of The Above