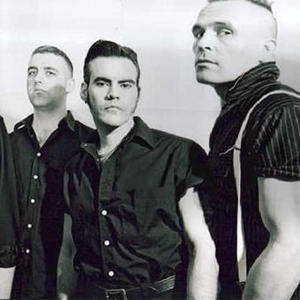 They have toured the world always tearing it up live with their live show that's been dubbed 'the greatest live show in the world' for its high octane sweaty high energy anthemic punk rock assault.

As for factual stuff; Goldblade were formed in 1996 when ex-Membranes front-man, journalist, and some time TV pundit John Robb met up with a like minded musician in a local UFC gym. Training like wild dogs their soundtrack was punk rock, hardcore and underground blues. They knew they had to form a band.
They were joined by ex-Membrane Keith Curtis on Bass, and ex-Hounddog drummer Rob Haynes. The initial line up set about shaking up the then stagnant live music scene. Immediately signed by Ultimate Records, they released a couple of low key singles before 'Strictly Hardcore' hit the UK national charts in March 1997. 'Hardcore' was taken from the album 'Hometurf', and the Blade then set about a relentless, and still continuing heavy touring schedule. A follow up single 'Hairstyle' was released which was made Single of The Week on BBC Radio 1, the band were invited, and appeared on Saturday morning TV; A second album 'Drop The Bomb' was released in 1998 before the bands label collapsed scuppering any chance of capitalising on their initial success. A couple of line up changes took place, with Pete GORGEOUS (ex Nightingales, UK Subs) and Johny Skullknuckles being brought in on dual lead guitar.
The band signed to a small Scottish indie, Twenty Stone Blatt Records, who released a ltd edition single 'AC/DC' as a taster for the follow up album 'Do You Believe In The Power Of Rock 'N' Roll', but once more fate took an unhealthy interest in the Blades activities, as this second label went bankrupt, thereby making 'Do You Believe..' virtually unobtainable.
However none of this dented the Blades passion for the live spectacle, as they toured the UK, America and Russia, being invited to appear at festivals and the like the world over. At one of these festivals; Wasted 2005, the Blade were seen by the label bosses of UK independent Captain Oi! Records. In a break with the labels usual style of putting out re-issues, they signed Goldblade on the spot. 'Rebel Songs' was released in 2005 to enormous critical acclaim, and basically has not stopped selling since, becoming the bands biggest release. In addition Goldblade have been signed to SOS Records in the USA, who have released a US only compilation ?Punkrockers In The Dancehall' with distribution by Sony, which is helping them gain exposure in the States. The result of this was that US label Cleopatra Records signed the band and made ?Rebel Songs' available in the USA. In addition 'Rebel Songs' has just been picked up by German label KB-Records, and the band are currently negotiating with a number of labels for a Japanese release, and a first release in Argentina.

2006 saw Goldblade release their first live DVD 'Testify' (Cherry Red Records) filmed in Blackpool during Christmas 2005, it ideally demonstrated the experience that is Goldblade live, the energy, the chaos, the entire audience on stage!!
Goldblade then toured with Stiff Little Fingers, The Misfits and The Damned, in addition to performing all over the UK for their own headline sets.

Due to the unavailability of the three early albums Captain Oi! took the decision to issue a compilation CD 'Strictly Hardcore' and bundled on a couple of tracks from 'Rebel Songs' - This release has been very well received, though its caused the Blade to be in the enviable position of being forced to make all their previous albums available as digital downloads in an effort to meet demand! We now offer the entire catalogue via iTunes, HMV, Virgin Digital etc.

2007 began with the same frantic pace that 2006 closed; Goldblade returned to Europe and played dates in Germany, the first for 7 years ? The band received a fantastic response, particularly in Berlin and Hamburg. Additional dates were also played in Switzerland and a first ever date in Gdansk, Poland ? Once more being greeted by huge crowds. Goldblade then appeared at the Punk & Disorderly Festival (Berlin) followed by Rebellion (A'Dam) These two appearances cemented their reputation as a high energy band, and secured them a place at the Glastonbury Festival in June 2007, appearing on the Left Field Stage.
2008 ? Goldblade broke into new territory, playing gigs in Serbia, and again in Poland, in addition to completing a full UK tour to promote their fifth album ?Mutiny' which was released in September, so things are certainly not slowing down for Goldblade, quite the opposite as they are tipped to break through to a much larger audience in the coming 12 months.
Prior to the albums release they put out a single ?Jukebox Generation' ? taken from ?Mutiny' in June 2008, the track received a great deal of radio play, with support from Radio 1, and Virgin Radio.

Goldblade also played a number of festivals throughout 2008, including The Rebellion Festival (Austria 04/08) & (UK 08/08), The Brittany Oi! Festival (France 05/08), Strummercamp 3 (05/08), Glastonbury (06/08), Endorse It in Dorset (08/08), and ended the year with a further single ?City Of Christmas Ghosts' which was reworking of a track from ?Mutiny' but with added vocals from legendary X-Ray Spex vocalist Poly Styrene, this become their best seller so far with all copies of the limited edition 7? vinyl selling within a week, the remainder of the sales coming via download. The track also received a great deal of radio play and was given odds at William Hill of 33/1 for the Christmas No.1!!

For 2009 Goldblade already announced a short tour in March, and will releasing our second live DVD, recorded in front of a 3000 strong crowd at London's Roundhouse in September 2008.

March 2009 - 'Riot! Riot!' was included on the soundtrack to the 'football hooligan' movie Green Street 2. The films release was promoted with a full TV ad hosted by Sainsbury's.

The Terror Of Modern Life