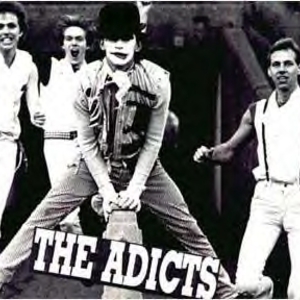 The Adicts are an English Punk rock band from Ipswich, Suffolk. They began life as the Afterbirth & The Pinz, in their hometown of Ipswich in late 1975. Popular in the 1980s, they were often in the indie charts at that time. They soon changed their name to The Adicts and became known for their distinctive Clockwork Orange 'Droog' image, which, along with their urgent, uptempo music and light-hearted lyrics, helped set them very much apart from the rest of the genre. Temporary 1980s name changes to ADX and FUN ADICTS, for a children's TV appearance, also occurred.

The band still has all its original members, uncommon for a band with such longevity.

The music of The Adicts proves that punk music is a very broad genre, often featuring extra instruments and sound clips such as carousel music (How Sad), violin played by Derick Cook (Joker in the Pack), gongs and keyboard percussion by Anthony Boyd (Chinese Takeaway), and even completely different songs like the switch to Gain To Lose's Tune #24 at the end of G.I.R.L..

The look of the majority of the bandmates is that of the Droogs from the Stanley Kubrick film A Clockwork Orange based on the book by Anthony Burgess. All white with black combat boots and black bowler hats. The band says that the look appealed to them because of the teenage angst associated with A Clockwork Orange. Singer "Monkey" wears full joker make-up and his clothes are wild, patterned suits, flared trousers, colorful dress shirts, and other such things. His favorites seem to be checkerboard patterns, or polkadots. And of course, there's the obligatory bowler hat and gloves. Along with the look come stage antics involving streamers, confetti, playing cards, joker hats, toy instruments, and glitter just to name a few things.

And It Was So!

All The Young Droods

Ultimate Adiction: The Best Of