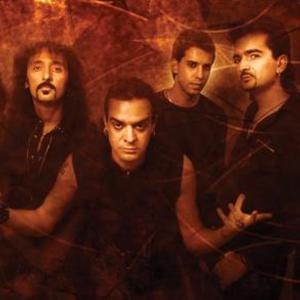 Thessaloniki, in the northeast of Greece, is the second biggest city of this country in which the enthusiasm for Heavy Metal is boundless. According to this, there are countless fans, clubs, magazines, and of course bands competing for local dominance. Rising from this concrete jungle in 1998: EMERALD SUN. The band had fought its way to the top of the local scene after performing numerous sweaty and impressive shows.

In all those years a line-up sharing more than the mutual fondness for music had been consolidated. Singer Jimmy Santrazami, the two guitar players Teo Savage and Johnny Athanasiadi, bass player Fotis "Sheriff" Toumanides, keyboardist Jim Tsakirides and drummer B-Wicked proudly call each other real friends with the ambition to conquer the stages of this world.

In 2003 and 2004 EMERALD SUN released two great demos: "Sword Of Light" and "High In The Sky", which received extremely euphoric reviews in Metal magazines all over the world. Even when hearing them for the first time, the powerful, melodic Speed Metal songs remind you of the Germans Helloween at their best time. This certainly is mostly due to the fantastic voice of Jimmy Santrazami which sounds like Michael Kiske's almost down to every detail. After shows with bands like Edguy, Omen, Grim Reaper and Redrum the band performed on many festivals, among others on the Rockemon, Rock Before X-Mas, Evil Existence Fest, Metal Up Your Ass and the Coca Cola-Fest. Supported by massive radio and TV promotion, EMERALD SUN becomes one of the most famous local bands.

In January 2005 EMERALD SUN enter the Nemesis Recording Studios in Kavala to record their debut album under the direction of producer Tasos Karapapazoglou (Nemesis, Elwing). His skilful guidance illuminates the new songs which had been diligently composed over years, and the remix and the mastering of R.D. Liapakis (Mystic Prophecy, Jack Starr, David Chastain...) makes them sound powerful and brilliant. "Escape From Twilight" (the title of the album) sounds so convincing that Limb Music Products agrees to a long-term cooperation with the band. At the international Mainhill Awards, they are elected best newcomer band. Plus, in the online edition of the third Heavy Metal Eurovision's Song Contest with participants from over 40 countries, EMERALD SUN finish second with the song 'Scream Out Loud'.

And now the time has come: 'Escape From Twilight' is released by LMP. Pieces like the award-winning 'Scream Out Loud', the title tracks of the demos 'High In The Sky' and 'Sword Of Light' and the phenomenal 'The Story Begins' will enthuse every fan of old Helloween, Stratovarius and Rhapsody totally. But EMERALD SUN are much more than a band with song-writing talent and musical skills which equal those of the old heroes. With their very own instinct for enthralling passages, toughened in the fire of countless, sweaty live shows, EMERALD SUN send the listener on a trip from one climax to another. It is difficult to elude the fascination of their music. So it gets obvious quite quickly why EMERALD SUN could establish themselves as the best of many excellent bands in their home country. And that is just the beginning of the story?

Under The Curse Of Silence