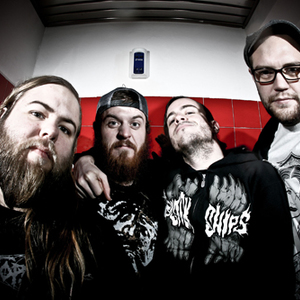 Cancer Bats are a hardcore punk band from Toronto, Ontario, Canada that formed in 2004. They have released four studio albums and six extended plays. The band is composed of vocalist Liam Cormier, guitarist Scott Middleton, drummer Mike Peters and bassist Jaye R. Schwarzer. Cancer Bats take a wide variety of influences from heavy metal sub-genres and fuse them into hardcore punk and punk rock. Including elements of sludge metal, and southern rock. The band has also been compared to metalcore bands of the 1990s like Converge and Hatebreed.

Cancer Bats originated in May of 2004 with singer Liam Cormier and guitarist Scott Middleton, former member of Toronto, Canada metal band At The Mercy Of Inspiration. The two wanted to form a project that combined their favorite parts of bands like Refused, Black Flag, Led Zeppelin and Down, among others. The lineup was rounded out with the addition of Andrew McCracken on bass and Joel Bath on drums. The four-piece wrote and recorded songs for a demo self-released in January of 2005.

Soon after, Mike Peters replaced Bath on the drums, and the band began playing shows throughout southern Ontario, playing live shows with bands like Every Time I Die, NORA, Alexisonfire, Haste the Day, It Dies Today, Bane, Comeback Kid, Buried Inside, Attack in Black, Misery Signals and This Is Hell.

On the 6th June 2006 the debut album, Birthing The Giant was released. It was produced by award winning Canadian producer Gavin Brown (Three Days Grace, Billy Talent). On June 7, 2006 they hosted All Things Rock, a show on MTV Canada, and had their own video played at the end of the show.

Summer 2006 they were on tour all across Canada, playing with well-known bands like NOFX and Silverstein. They also played the Rock The Mill festival with other bands such as The Fully Down and Shotgun Rules.

Critical acclaim led to signing licensing deals with Hassle in the UK and Shock in Australia, and to winning the Favourite Hardcore/Metal Group of the year at the 2007 Indie Awards, and Best Independent Video at the 2007 MuchMusic Video Awards

Bass player Andrew McCracken left to concentrate on his design company Doublenaut. His spot was filled in by Jason Bailey (Former member of bands Figure Four and Shattered Realm) for most of 2007 after which he was replaced by Jaye R Schwarzer formerly of Left Behind, Hope To Die, Minesweeper, Kover and current Reefer Cathedral member alongside Cancer Bats guitarist Scott Middleton.

The third album, Bears, Mayors, Scraps & Bones was released on April 13, 2010 through Distort Entertainment in Canada. The name of the album derives from each of the band members personal nickname (Mike - Bear. Scott - Mayor. Liam - Scraps. Jaye - Bones.)

Dead Set on Living was the band's fourth studio album. The Dead Set On Living Songfacts reports the record was recorded in December 2011 and released on April 16, 2012 through Hassle Records in Europe, April 17th through Distort Entertainment in Canada and April 23nd through Metal Blade Records in the United States.

The Spark That Moves