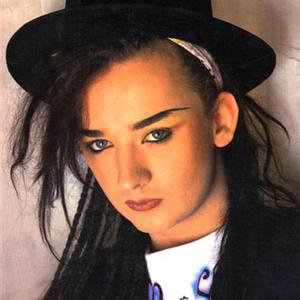 George Alan O'Dowd (born June 14, 1961, in London, United Kingdom), a Irish/British singer, songwriter & DJ who gained fame with his group Culture Club during the 80s. He epitomized the term "blue-eyed soul" and received just as much airplay on R&B radio stations as pop stations. George's androgynous style caught the attention of music executive Malcolm McLaren, who arranged for George to perform with the group Bow Wow Wow, featuring Annabella Lwin, at various shows. George called himself Lieutenant Lush and nearly stole the spotlight from Lwin.

George's androgynous style caught the attention of music executive Malcolm McLaren, who arranged for George to perform with the group Bow Wow Wow, featuring Annabella Lwin, at various shows. George called himself Lieutenant Lush and nearly stole the spotlight from Lwin. George and Bow Wow Wow didn't last long after that and George started his own group with bassist Mikey Craig. In Praise Of Lemmings was to be the name of the group. Jon Moss (who had drummed with The Damned, Adam and the Ants and London) came aboard. Shortly thereafter, Roy Hay came into the mix, after an association with another guitarist proved unsatifactory, and they abandoned yet another name, Sex Gang Children. After realizing that the group consisted of an Irish transvestite singer, a Jamaican-Briton on bass, a Jewish drummer, and an Englishman on guitar, they settle on the name Culture Club.

The band signed with Virgin Records in the U.K. and with Epic Records in America, as Virgin didn't have a U.S. presence at the time, and released it's debut album "Kissing To Be Clever" in 1982. The first single "White Boy" wasn't a mainstream hit and failed to chart but George was still happy because "five thousand people bought my single and didn't even know me". The next single, "I'm Afraid Of Me" also did not become a pop hit. It wasn't until the release of the third single, "Do You Really Want To Hurt Me", that the group enjoyed massive success. It hit #1 in sixteen countries (#2 U.S.) and the group became a staple on American radio and the new MTV network. This single was followed by the number two peaking "Time (Clock Of The Heart)" and the number nine "I'll Tumble 4 Ya". This gave Culture Club the distinction of being the first group since the Beatles to amass at least three top 10 hits on the Billboard Hot 100 from a debut album.

1983 and 1984 saw the group at it's peak, dominating charts, MTV, and magazine covers partly due to the release of it's next album "Colour By Numbers". First single "Church Of The Poison Mind" (featuring Helen Terry) became a Top 10 hit and "Karma Chameleon" hit #1 for four weeks in the U.S. and was the biggest selling UK single of the year, having six weeks at No.1). It also became a #1 single in numerous countries around the world and stands as the group's biggest hit. "Miss Me Blind" and "It's A Miracle" were Top 10 and Top 20 hits respectively and "Victims" was another U.K. hit. The group took home the Grammy for Best New Artist - Duo Or Group and George gave a speech to U.S audiences via satellite; "Thanks America. You've got style and taste, and you know a good drag queen when you see one". Colour By Numbers would go on to sell four million copies in the U.S. at it's time of release and millions more worldwide, making Culture Club the biggest group in the world at the time. Years later, Rolling Stone magazine would include the LP in it's list of Top 100 Albums Of All-Time.

George's striking looks inspired many Boy George look-alike contests around the world, and his face became the image of Culture Club. He became an alternative teen idol, and had the extravagant lifestyle to go with it. His appeal was due to his likeableness and his wit. He is responsible for one of the 1980's most famous quotes, which he delivered to Barbara Walters on a tv interview - "I prefer a nice cup of tea to sex" - which many years later he would say was totally untrue. The fact that he could actually sing and had a distinct soulful voice was a great attribute as well.

By 1985 Boy George had become a household name in many countries around the world. That year he appeared, redheaded, on the Band Aid single to raise money for aid to famine-stricken Ethiopia, with a lead vocal role. The worldwide success of the multi-British and Irish artist single lead to a U.S version, "We Are The World. And in 1986 he guest-starred on an episode of the A-Team entitled "Cowboy George". However, two subsequent Culture Club albums (Waking Up With The House On Fire and From Luxury To Heartache) performed poorly as the band only manage to obtain two more hits; "The War Song" and "Move Away". Throughout the years, George had been involve in a relationship with Culture Club's drummer Jon Moss and when that fizzled, he turned to drugs to ease the pain. This caused the downward spiral of the group and they eventually disbanded, as George could no longer work with Moss. One sign of the group's imminent breakup was that they didn't appear at the Live Aid event, and they were a major act.

George's addiction to heroin was severe and he began an on again-off again fight against the drug for many years. He would appear in public under the influence and even attempted to do concerts in such state. Addictions to other drugs followed and George's brother, in an attempt to save his famous sibling from death, went on U.K. national television and blew the whistle on George. Some of George's associates had died of overdoses but when an American musician he was working with was found dead at his London mansion from an overdose, this hit home for George. He finally quit using drugs.

Virgin Records had now set up a U.S. operation and George moved from Epic Records in America to Virgin worldwide. George's first solo album released after the breakup of the band was entitled "Sold". It was very successful in the U.K., spawning many hit singles (including the #1 U.K. hit "Everything I Own") but he could not duplicate that success in the U.S. He did score a moderate hit with the song "Living My Life" (#40 U.S.) from the "Hiding Out" soundtrack. His next U.S album would be "High Hat", comprised of songs from two of his solo British albums released after "Sold". As an album, "High Hat" is one of his strongest releases in America material wise, but was overlooked, although it contained the excellent R&B dance number "Don't Take My Mind On A Trip", produced by Teddy Riley. The single became a moderate R&B hit. Many of his following releases were songs to protest against the UK's restrictions on sex education relevant to the needs of homosexual students (known as Clause 28). In 1989 George formed his own label, More Protein. He also recorded under the moniker Jesus Loves You, (writing under the pseudonym Angela Dust), releasing an underground club hit "Generations Of Love" and what would become a signature song, "Bow Down Mister", inspired by his involvement in the Hare Krishna movement.

In 1992, George scored a hit with a Pet Shop Boys produced cover version of the song "The Crying Game", which was featured on the movie of the same name, and landed in the top twenty on the Billboard Hot 100. Although he had subsequent solo hits in the U.K. since the breakup of the band, this would be his first U.S. hit since Culture Club's 1986 single "Move Away". However, he did not capitalized on his resurgence by immediately releasing an album. When he finally did release the rock-driven Cheapness And Beauty a few years later, the momentum had already died. From that album, he released his version of the Iggy Pop song "Funtime." Still, George would say that the "Crying Game" era gave him a sense of satisfaction. His former lover Jon Moss had told him, after the messy breakup of Culture Club, that George would never have another major hit in America without the band. George was more than happy to prove him wrong.

Boy George continues to remain a global pop icon and a successful music DJ. He once again started touring the world as a DJ in the late 1990s and starred in the London musical Taboo, based on his life (George didn't play himself, opting instead to take on the persona of Australian-born performance artist Leigh Bowery). Taboo was a huge success in London's West End. During 2003 he presented a weekly show on London's LBC radio for 6 months. George has been reported by fans who have met him in person to be an avid autograph signer. In August 1994, a British court tossed out a paternity suit filed against him by a Californian woman.

Harper Collins published the autobiography of Boy George, Take It Like A Man, in 1995. George wrote of his relationship with Kirk Brandon, singer with Spear of Destiny and the earlier Theatre of Hate, who began a High Court action against George.

George, taking the witness stand, faced a "malicious falsehood" charge brought against him by Brandon, now married and a father, who denied that he once had a sexual relationship with George. Brandon lost. During the trial, Boy George had claimed that Kirk Brandon had been the love of his life and that he still loved him.

In his book, George also told his side of his secret relationship with Culture Club drummer Jon Moss. He stated many of the songs he wrote for Culture Club were directed at Moss. He also alleged that Moss had broken off his engagement to be with George, and that Moss was never comfortable in a gay relationship although Moss was bisexual.

In July 1998, a reunited Culture Club performed three dates in Monte Carlo and then joined Human League and Howard Jones in a "Big Rewind" tour of the US. The following month, the band appeared on Late Night with David Letterman and made an appearance in Britain, their first in 14 years. Later that year, the band had a Top Ten hit in the UK with "I Just Wanna Be Loved".

In 1998, Boy George began writing a weekly column in The Daily Express and hosted a weekly radio show on the Galaxy Radio Network. In October 2005 he was arrested in New York City on suspicion for possession of cocaine and appeared in court in February 2006. George stated the drugs were not his and has declared his innocence.

He's a successful DJ that occassionally tours and remains a pop icon.

He has also recently appeared as a guest on the British comedy-talk show The Kumars at No. 42.

In 2005 he published Straight in Britain, his second autobiographical book. He lives in Manhattan.

On October 7 2005, he was arrested in Manhattan on suspicion of possessing cocaine, (BBC Online Report) and appeared in court on 1 February, 2006 (BBC Online Report) on charges of cocaine possession. On 8 March 2006 he pleaded guilty to wasting police time; the charge of possessing cocaine was dropped, and he was given a non-custodial sentence and fined. (BBC News report).

London newspaper, 1984: "I'm not gay, and I'm not a transvestite." (At other times he has characterized himself as "bisexual", "very confused", "not confused", and "not really all that keen on sex".)

This Is What I Do

U Can Never B2 Straight

The Unrecoupable One Man Bandit Vol. 1