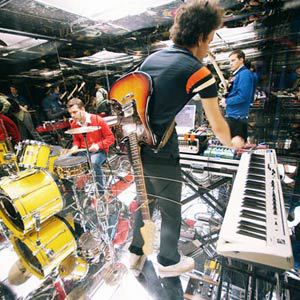 Battles released three EPs in 2004, each on a different record label (Cold Sweat, Monitor and Dim Mak). These were rereleased on the influential Warp label in 2006. Preceded by the Atlas EP ( "single of the week" in NME), and with hype building, the LP Mirrored was released on the 14 May 2007 to widespread critical acclaim.

Among the many positive reviews, the album received a score of 9.1 in a Pitchfork Media review and a glowing write up in the UK's Clash Magazine, where comparisons were made to Glitter Beat. The band scored its first UK cover feature in May 2007, talking to Plan B Magazine about the making of Mirrored.

Drummer John Stanier's yellow Tama drum kit is defined by an extremely high Zildjian K ride cymbal. He believes the ride cymbal is overused in drumming, so he wanted to make it more of an effort to play it. He has to jump up from his drum seat to hit it during live performances.

In August 2010, Battles announced that Tyondai Braxton had amicably left the band to continue his solo career.