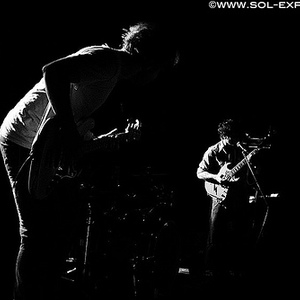 Tera Melos is a band from Sacramento, California, that incorporates many styles of rock, jazz, ambient electronics and unconventional song structure all in one, to create their original genre. They are currently a four-piece (formerly four, then three, now four again), consisting of a guitarist/vocalist, bassist, drummer and a new guitar/keyboardist/vocalist added to the line-up. Tera Melos play a brand of music characterized by quickly alternating rhythmic patterns, start-stop dynamics, improvisation...

Tera Melos play a brand of music characterized by quickly alternating rhythmic patterns, start-stop dynamics, improvisation, two-handed tapping on the guitar, extended open-ended bridges, and the use of effect pedals and samplers. After releasing a four song demo, they self released their untitled debut full-length on October 4, 2005. The album comprises eight tracks, and was re-issued in 2008 on Sargent House. While some of the tracks on the album feature distorted vocals that are somewhat undecipherable, guitarist Nick Reinhart started contributing more prominent vocals to the music with the release of their 2007 split with By the End of Tonight, called Complex Full of Phantoms.

Right before they started recording their second EP Drugs to the Dear Youth, one of the guitarists, Jeff Worms, left the band. It is rumored that Worms left to pursue a career in college football. This has been confirmed by Worms, although he has not cited what college he is currently playing for. On January 19, 2007, Tera Melos released the LP on Sargent House. ?Drugs' for short, was a step away from the previous sound they had before and farther into more progressive and original regions.

Tera Melos have over the past few years, developed a cult-like fan base around the United States and have recently gained some popularity in Europe, Asia, and South America.

Tera Melos announced on their MySpace page on April 2, 2007, that drummer Vince would be leaving the band to pursue other things, namely returning to college to pursue a career as a math professor. The band began searching for a new drummer shortly thereafter. After a little more than a year, the band announced the addition of John Clardy as their new drummer. Originally the band had planned a long-awaited LP release after touring, however they ended up releasing an EP of covers, featuring songs by The Beach Boys and Polaris, entitled Idioms, Vol. I.

On November 7, 2009, Tera Melos confirmed a new album due out in 2010 in a myspace bulletin. The post stated that the band was set to begin recording the next day, November 8. The new album, titled Patagonian Rats, was released in September 2010, and like their 2007 split with By the End of Tonight, it included vocals.

Drugs To The Dear Youth