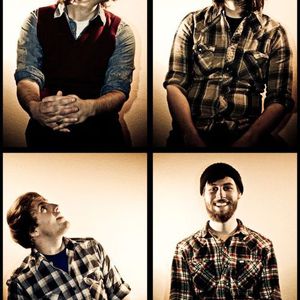 Maps & Atlases is an indie rock band which formed in Chicago, Illinois, United States in 2004. The band consists of Dave Davison (vocals, guitar), Erin Elders (guitar), Shiraz Dada (bass) and Chris Hainley (drums). The band released their long-awaited first full-length album, Perch Patchwork, on June 29, 2010. The record was produced by Jason Cupp (The Elected, Nurses, Cast Spells). The band's unique style melds the technicality of progressive music and the idiosyncrasies of art rock into a fascinating and oddly accessible sound all their own.

Known for their virtuosic musical ability, Maps & Atlases write pop songs with a magnificent aptitude for texture and a distinctive blend of both the intricate and organic.

?It was great to be able to step outside of our live setting and imagine the songs in a different way,? said guitarist Erin Elders about the recording process for Perch Patchwork. ?Jason Cupp brought another dimension to the songs that was really exciting to hear. We were able to deconstruct them part by part and then rebuild each verse or chorus with a different sonic idea.?

Continues singer/guitarist David Davison, ?We went into the record with the understanding that the creation of the album would be separate from its existence as a live piece of music, which was really liberating.?

The members of Maps & Atlases met in Chicago while attending art school, formed the band in 2004 and have released two EPs through indie label Sargent House. While Tree, Swallows, Houses showcased the band's more technical side, the subsequent You And Me And The Mountain presented more earthly and digestible songs that earned comparisons to TV On The Radio, Deerhoof, CAN, and even Prince.

Maps & Atlases recently signed to Barsuk Records in the US, who handle the North American release of Perch Patchwork, and to FatCat for the UK and Europe.

Lightlessness Is Nothing New

Beware And Be Grateful

You And Me And The Mountain (EP)