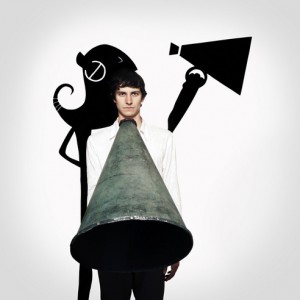 Wouter "Wally" De Backer (born 21 May 1980 in Bruges, Belgium), better known by the stage name Gotye, is an indie pop/experimental singer/songwriter and multi-instrumentalist based in Victoria, Australia. Backer was born in Belgium, but moved with his family to Melbourne, Australia when he was two. Originally a member of the indie band Downstares, Backer began performing under the name Gotye in 2001 when the band disbanded. Aside from his solo work, De Backer has been a member of the indie band The Basics since its formation in 2002.

Gotye's second album Like Drawing Blood was featured by Triple J in May 2006 and was voted Number 1 in the listeners poll of the Best Album of 2006 . The album was also nominated for a J Award that year. Two tracks from that album, Learnalilgivinanlovin and Heart's A Mess, were ranked 94 and 8 respectively in Triple J's Hottest 100 for 2006. Like Drawing Blood has been certified Platinum.

In September 2006, Gotye was nominated for an Australian Recording Industry Music Award (ARIA award) for best independent release for his album Like Drawing Blood, and won 'Most Outstanding New Independent Artist' at the inaugural Australian Independent Record (AIR) Chart Awards.

In 2007, Gotye won the ARIA for best male artist. As a result of the publicity of the nomination, Like Drawing Blood re-entered the ARIA album chart and was named iTunes UK Album of the Year in 2008.

Amidst the lead-up to Gotye's third album, Like Drawing Blood re-entered the ARIA charts in mid 2011, peaking at its highest ever position of 13.

After the success of Like Drawing Blood, De Backer was able to establish a permanent home, still in Melbourne's South East. In 2010, De Backer set up a recording studio in a barn at his parents' farm and set about recording tracks for his third album. He released a new single, Eyes Wide Open, in mid-October 2010, online and on 10" vinyl. The single received generally positive reviews and reached number 25 in the Triple J Hottest 100 of 2010. It was also shortlisted for the 2011 APRA Music Awards in the Song of the Year category.

In late March 2011, De Backer revealed the album's title to be Making Mirrors. This title was inspired by an artwork, painted by De Backer's father in the 1980s, discovered by De Backer amongst old bills and newspapers in his parents' barn, which was later edited in Photoshop to become the album artwork. "The mirror reflects on artwork and it is all very related to self-reflection and introspection on the album."

On 19 May, it was announced that the album would be released on 19 August 2011, with the album launch the following day at the Sydney Opera House as part of the Graphic Festival which will feature animators and a 10-piece orchestra as part of Gotye's performance. De Backer also released a follow-up single to Eyes Wide Open titled Somebody That I Used to Know, which was released 6 July 2011, and debuted at #27 on the ARIA Top 50 Singles Chart. The single became something of a sensation, quickly moving up the ARIA singles chart despite comparatively low airplay to many other charting singles at the time. The track was further boosted by endorsements from well-known celebrities Ashton Kutcher and Lily Allen via Twitter, exposing Gotye's music to their millions of followers. The single has gone on to reach 6? Platinum (420,000 units sold) status.

On its first week of release, Making Mirrors came in at number one on the ARIA Australian album chart, making Gotye the first Australian act to simultaneously hold both the number one single and album since Silverchair, who achieved the same feat in 2007.

On 11 October 2011, it was announced that Gotye had been nominated for seven ARIA Awards. Due to the release date restrictions of the eligibility period, Making Mirrors could not be nominated, and the seven nominations all related to the single Somebody That I Used to Know. Gotye was nominated for Highest Selling Single, Single of the Year, Best Pop Release, Best Male Artist and three awards in the ARIA Artisan category: Best Video (Natasha Pincus), Engineer of the Year (Francois Tetaz) and Producer of the Year (Wally De Backer). On the same day the nominations were revealed, the winners of the Artisan categories were announced, with Gotye and the album personnel winning all three. On 27 November 2011, Gotye took out three of the four remaining ARIA Award nominations. Single of the Year, Best Male Artist and Best Pop Release.

"Somebody That I Used To Know" has become an international hit, reaching #1 in Australia, Belgium, United Kingdom, Poland, Austria, Ireland, Norway, The Netherlands, New Zealand and Germany, and also reached #1 on the alternative radio airplay charts in The United States and Canada (on the pop charts in those countries, the song has reached #5 and #11, respectively).

Somebody That I Used To Know

Somebody That I Used To Know (Tiësto Remix) (CDS)

Showdown Below My Sombrero (CDS)