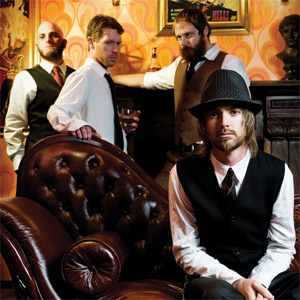 Birds of Tokyo are a four-piece alternative rock band from Perth, Western Australia that formed in 2004. Their debut album, Day One, gained them domestic success with it reaching No. 3 on the AIR Independent Album charts, spending a total of 36 consecutive weeks in the top 10. In 2008, the band released their second album, Universes, which made it to No. 3 on the Australian ARIA Albums Chart. In 2010 the band released its highest charting album to date, Birds of Tokyo, which reached No. 2 on the ARIA Albums Chart.

It's no secret that the landscape of Birds of Tokyo's home of Western Australia; a desert-like state so vast and unforgiving that to provide it with a soundtrack requires a higher level of grandeur and majesty one would ever dare associate with the ?pop' music tag.

But, down to its bones, pop music is what Birds of Tokyo write? they just layer those bones in muscle, and give the beast a heart.

Beautifully expressive in its texture, yet thick and rich in its deceptive simplicity; Birds Of Tokyo's music is universal and incredibly humanistic. In what could be described as the blink of an eye, the band have struck a nerve in their homeland, giving way to an unprecedented rise to popularity, but it is in their blossoming international recognition can be seen the band's true strength and ability to connect with people.