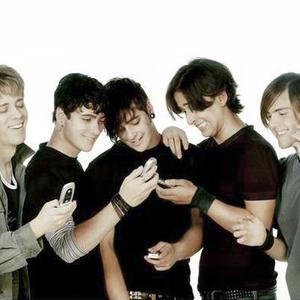 2010: they are dustin 23,kelly 22,patrick 20,carnell 19,bryan 17.they just got signed to another record company and are working hard on a new cd 2009: 1. The five Breeding brothers of B5, consisting of Dustin 22, Kelly 21, Patrick 19, Carnell 18 and Bryan 16, are back, all grown up and showing off a new mature sound. Their sophomore album is set for release on Diddy's Bad Boy Records and the title, Don't Talk, Just Listen, says it all. Co-Executive Producer Kevin Wales had a great idea and after discussing it with the group they all knew the title was right.

2009:
1. The five Breeding brothers of B5, consisting of Dustin 22, Kelly 21, Patrick 19, Carnell 18 and Bryan 16, are back, all grown up and showing off a new mature sound. Their sophomore album is set for release on Diddy's Bad Boy Records and the title, Don't Talk, Just Listen, says it all. Co-Executive Producer Kevin Wales had a great idea and after discussing it with the group they all knew the title was right. Dustin explains, "We came up with that title because we want people to let go of their old notions about who we are and listen to what we have to say."

And what the boys are saying is pretty much what you'd expect of teenage boys on the verge of manhood. "It's still clean music but it has more of an edge," says Kelly. "We're not talking about how we can't wait to see a girl in school the next day [as in their 2005 single, All I Do], we're talking about chilling and dancing in the clubs; we're talking about girls, like all teenagers do."

On 'Don't Talk' B5 cleverly navigates the vast emotional terrain of love and relationships, unleashing an array of stories, many of them taken from their own experiences. "Erica Kane" is just one example of the broad scope of experiences the Breeding brothers have shared since they first stepped into the public eye. While they hold onto much of who they were when fans first met them, it's clear that the Kansas-born, Florida-bred brothers are ready to push the envelope. "It's been two years since our first album," says Dustin. "We were younger back then but with this album we had more say-so in terms of what we wanted to do. From this album you'll get to see more of the real side of B5." Carnell adds, "We're growing up and we know the fans are growing up with us."

"Hydrolics," featuring Bow Wow, is the first single from the album and a powerful glimpse into "Don't Talk". "Hydrolics" takes listeners straight to the club with a real low Dirty South beat. One of Kelly's favorites is "In My Bedroom" (produced by Michka). "It's about a dude who breaks up with his girl and he's sitting in his bedroom wishing he could get back with her," Kelly explains. Co-written by the boys and producer Blaze, "Incredible" extols the virtues of a beautiful woman. In that same vein are the tracks "She's Got it Like That" and the Underdogs collabo, "Things I'll Do For My Girl" -- all clear examples that B5 love to give the ladies their props.

But the set does take some twists and turns. "Teardrops," a song about unattainable love, seems to resonate most with Patrick. ""Teardrops" is basically saying that you have this girl that you like and she likes you too but she's with another dude that doesn't treat her right and you're always asking her why she's with him."

The edgy Insomniax production "Rock Star" and provocative "Right to Left" (the Adonis/Bryan Michael Cox production) help to round out the set.

But even as the brothers venture off into a more mature sound, they say they don't plan to stray so far off course that they lose sight of the ship that brought them to the shores of success. "Disney has been good to us over the past two years. They've given us a lot of work and they've allowed us to do a lot more to spread our wings, but we also have to show our growth," says Kelly.

Despite the Disney success, carefully orchestrated by manager Jim McMahan, the boys know that not everyone gets the connection. "Our older fans think that because we're doing Disney stuff we're selling out but it's nothing like that," says Kelly. "Disney is another opportunity for us to widen our fan base. Not many artists get to do Disney and then do BET, MTV, etc. They usually do one or the other! Why would we not want to do that? We're not selling out. We're just expanding."

"We have the 19-year-old crowd, the 15-year-old crowd and the 13-year-old crowd to think about," notes Patrick. "We've got songs for Dustin and Kelly for the clubs and we've got songs for Bryan and everybody else." "There were times when we wanted to take our lyrics to the edge and maybe say something a little sexual but when we stopped and thought about it we decided we really didn't need to do that to make a good record. We can save that stuff for later," adds Kelly.

2006:
As the boys spread their wings they are hoping that their fans will get to know them better. "People don't really know who we are; they don't know how we grew up," says Carnell as he explains that the five boys and their mother Adrian once shared a three-bedroom house with their grandmother, their aunt and nine other cousins. "People think we grew up in the suburbs and were pampered all our lives," says Kelly. "We had a hard life," says Dustin. "We grew up living off oranges and Ramen noodles, but we learned to work hard and be thankful because it could have been even worse."

Even though those days are long gone, the Breedings have never lost sight of their struggle or their identity. Now, they just want everyone else to see them clearly as well. And the baby of the brood, 13-year-old Bryan, brings it home: "I just want all the fans to be happy. I don't want to disappoint anyone. I just want everybody to hear it so they can know how we really feel."