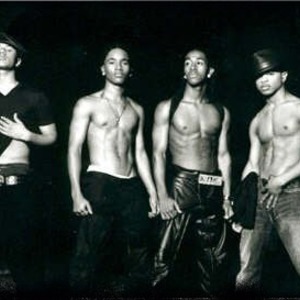 B2K was an American R&B music group from Los Angeles, California with Omarion, Lil' Fizz, Raz-B and J-Boog as its members. Founded and managed by music producer Chris Stokes, they were active from 2001 until 2004 and released two albums, 2001's B2K and 2002's Pandemonium!. They also featured in the film You Got Served as a breakdancing crew, and several songs by the group were featured on the film's soundtrack album.

In 2008 there were talks of a reunion, and a new song titled 'Body Up' leaked onto the internet featuring all the members except Omarion, but these rumours have never been confirmed.

Even though they were newcomers to the industry, their first LP, 2002's B2K, became an instant hit. Their second (and final) regular studio album, Pandemonium!, was released in December of the same year, and garned the US #1 hit single "Bump, Bump, Bump" and "Girlfriend". The group was featured regularly on the covers of teen magazines such as Right On! and Word Up, and released a Christmas album in-between their regular two albums entitled Santa Hooked Me Up.

In addition to that, they were featured on the soundtrack album for MGM's film Barbershop and headlined The Scream Tour, their third, in 2003. Marques Houston, Jhene, Mario and Nick Cannon were also performers on The Scream Tour.

Those who were against the california-based boy band often claimed that their music is too mainstream, thus resulting in the boy band garnering nicknames such as, "B2Gay" and "B2Fugly."

In January 2004, Chris Stokes announced that the group had broken up. Three of the members claimed financial mishandling by Stokes' management company, TUG (The Ultimate Group); the fourth member, Omarion, claimed the allegations were untrue.

In the midst of the breakup, Screen Gems's You Got Served, a film starring the members of the group and Omarion's half-brother Marques Houston as breakdancers, went into general release on January 30, 2004, and hitting number one at the box office, earned more money than any other film that opened during a Super Bowl weekend. A number of the group's songs were featured on the film's soundtrack album.

B2K Is Hot! (Boys Of The Millennium)

Greatest Hits (With The Underdogs)

Santa Hooked Me Up