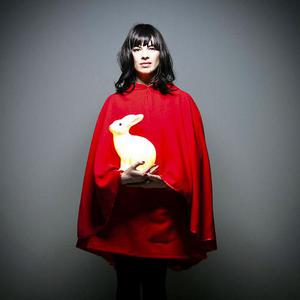 Born in London of a French mother and Irish father Camille moved to Cork, Ireland when she was a child. Prior to running away with the circus ?The Famous Spiegeltent', she spent a year studying Fine Art painting then onto University College Dublin, where she graduated as an Architect. As a solo performer Camille has performed 5 Star sell out seasons in Australia, New York, UK and Ireland and sold out her run at the Sydney Opera House and the 3000 seated State Theatre as part of the Melbourne International festival last year..

As a solo performer Camille has performed 5 Star sell out seasons in Australia, New York, UK and Ireland and sold out her run at the Sydney Opera House and the 3000 seated State Theatre as part of the Melbourne International festival last year..

After being spotted in ?La Clique' at the Famous Spiegeltent by Ewan Bremner (Spud from Trainspotting) O'Sullivan recently co-starred in the Academy Award nominated film Mrs Henderson Presents directed by Stephan Frears, opposite Dame Judi Dench and Bob Hoskins. She has also appeared as guest with Damien Rice and Shane McGowan.

As a singer, O'Sullivan enjoys a formidable reputation for her passionate and dramatic interpretations of the songs of Jacques Brel, Nick Cave, Tom Waits, Kurt Weill and more. Her shows are theatrical,like an actor telling a story through music than simply singing songs. Chameleon like on stage, performing in English, French and German each song becomes a different character.

As an actress she's worked with Conall Morrison (Abbey Theatre) and films November Afternoon, On the Edge and Graham Cantwell's L'Etranger. Other projects include Finola Cronin's ( a former soloist with Pina Bausch) critically acclaimed Tanztheatre piece Murder Ballads, Gavin Kosticks One Night Stand and George Kreisler's Tonight Lola Blau and for RTE television 2005 as Lola Monetz in Her Name was Lola. She is currently performing in Sweeney Todd at the Gate Theatre Dublin.


O'Sullivan won the prestigious Architectural Association of Ireland Award in 2000 and has exhibited in the Royal Hibernian Academy, Ireland as a painter. As a performer she was recently awarded ?Star of the Brighton Festival' 2006, ?Best Music' Brighton Fringe Festival Awards 2005 and a Melbourne Green Room Theatre Award for Best Cabaret Artiste' 2004. She recently has become the face of Hennessy Cognac in their new adverts.

Recently
Camille sold out 17 nights at the Edinburgh fringe festival receiving 5 star reviews including the UK Independent, the Scotsman, Three weeks, Broadway baby, she was also one of the 5 top selling music shows in the Festival and received the Spirit of the Fringe Award.