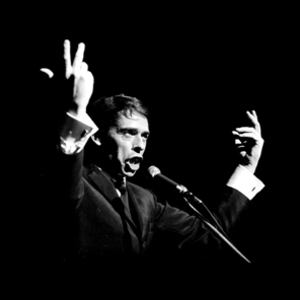 Jacques Brel (1929?1978) was a French-speaking Belgian singer and author-composer. Known in the English-speaking world mainly through translations of his songs, he is also remembered in French-speaking countries as an actor and director. Brel was born on 8th April 1929 in Schaarbeek, a district of Brussels, and lived half of his life in Paris. He died of lung cancer on 9th October 1978 in Bobigny in the suburbs of Paris, and is buried in the Marquesas Islands.

Brel was born on 8th April 1929 in Schaarbeek, a district of Brussels, and lived half of his life in Paris. He died of lung cancer on 9th October 1978 in Bobigny in the suburbs of Paris, and is buried in the Marquesas Islands.

Although the Brels spoke French, they were of Flemish descent, with some of the family originating from Zandvoorde, near Ieper. Brel's father was co-owner of a cardboard factory and Brel started his professional life at that firm, apparently destined to follow in his father's footsteps. However he had no interest in it, showing instead an interest in the arts, having joined the Catholic-humanist youth organisation Franche Cord?e, where he did some singing and acting. At Franche Cord?e he met Th?r?se Michielsen ('Miche'), and they married in 1950.

In the early 1950s Brel achieved some minor success in Belgium, singing his own songs. A 78rpm record ("La foire"/"Il y a") was released as a result. From 1954 Brel seriously pursued a singing career. He quit his job and moved to Paris, writing music and singing in the city's cabarets and music-halls.. In January 1955 he supported in the ancienne belgique in Brussels the performances of the Belgian pop and variety pioneer Bobbejaan Schoepen. After some success his wife and daughters joined him from Belgium. By 1956 he was touring Europe and he recorded the song "Quand on n'a que l'amour", which brought him his first major recognition. He appeared in a show with Maurice Chevalier and Michel Legrand.

By the end of the 1950s Miche and Brel's three daughters moved to Brussels. He and his family led separate lives from then on. Under the influence of his friend Georges Pasquier ('Jojo') and pianists G&eacute;rard Jouannest and Fran&ccedil;ois Rauber, Brel's style changed. He was no longer a Catholic-humanist troubadour, but sang grimmer songs about love, death, and the struggle that is life. The music became more complex and his themes more diverse, exploring love ("Je t'aime", "Litanies pour un retour"), society ("Les singes", "Les bourgeois", "Jaur?s") and spiritual concerns ("Le bon Dieu", "Dites, si c'?tait vrai", "Fernand"). His work is not limited to one style. He was as proficient in comic compositions ("Le lion", "Comment tuer l'amant de sa femme...") as in more emotional ones ("Voir un ami pleurer", "Fils de...", "Jojo"). He composed and recorded his songs almost exclusively in French, and is widely recognised in French-speaking countries as one of the best French-language composers of all time.

But he occasionally included parts in Flemish, as in "Marieke", and also recorded Dutch versions of a few songs; since his own command of the language was poor, these were translated by Ernst van Altena, renowned translator of French song.

His attitude towards the Flemish was marked by a love of Flanders and the Flemish countryside, but a marked dislike of Flemish nationalism: he declared himself Flemish and presented himself to the world as a Flemish singer, but he also mocked rustic Flemish life with the comic song "Les flamandes". Later in his career he directed his political anger at the Flamingants; France Brel, his daughter, has been quoted as saying: "he was very Flemish. He believed in discipline, hard work, he was always punctual. Our family is Flemish in character in many ways, Jacques was proud of his Flemish blood."

"If I were king", Brel himself once said, "I would send all the Flemings to Wallonia and all the Walloons to Flanders for six months. Like military service. They would live with a family and that would solve all our ethnic and linguistic problems very fast. Because everybody's tooth aches in the same way, everybody loves their mother, everybody loves or hates spinach. And those are the things that really count."
Although France was Brel's "spiritual home" and he expressed contradictory statements about his native Belgium, some of his best compositions pay tribute to Belgium.

For twenty years he was a major star gaining recognition beyond French audiences. In 1973 he retreated to French Polynesia, remaining there until 1977 when he returned to Paris and recorded his well-received final album.

A heavy smoker, it was discovered in 1973 that Brel had lung cancer. He died in 1978 and was buried in Calvary Cemetery in Atuona, Hiva Oa, Marquesas Islands, French Polynesia only a few yards away from painter Paul Gauguin.