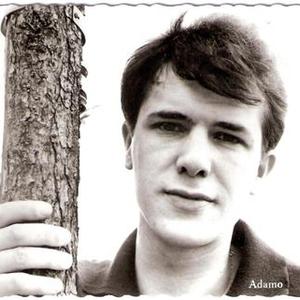 Salvatore, Knight Adamo, simply known as Adamo (born 1 November 1943, in Comiso, Sicily, Italy) is a Belgian ? Italian composer and singer of ballads, mainly in French, but also in other languages such as German, Italian and Spanish. He had commercial success during the 1960s and 1970s, mostly in Europe and Latin America, but also in Japan and the United States. Now he lives in Belgium. He is of Sicilian/Italian ancestry.

Adamo is one of the most commercially successful singers in Europe. Adamo has sold over 80 million copies of his albums worldwide. He is currently living in Belgium though he has lived in France with his family. His hits include "Tombe La Neige", "Vous Permettez, Monsieur?" and "Inch'Allah", all from the sixties.

Adamo's early influences were the poetry of Victor Hugo, the music of French crooners such as Jacques Pr?vert or Georges Brassens, and the Italian canzonette. He started singing and composing his own songs from an early age. His debut was in a Radio Luxembourg competition, where he participated as singer and composer of the song "Si j'osais" ("If I dared") winning the competition's final held in Paris, in 14 February 1960.

The self-penned "Petit Bonheur" sold over one million copies by April 1970, and was awarded a gold disc.

Am?lia Rodrigues recorded "Inch'Allah" in French. Adamo briefly attempted movie acting when he was cast in the film Les Arnaud (1967), which starred Bourvil.

He has recorded in many languages and, besides France and Belgium, had hits in Italy, the Netherlands, Germany, Spain, Portugal, Turkey and also in Japan, where he toured repeatedly. Adamo has had hits and toured also in Latin America. In Chile, the audience awarded him an appreciation prize known as the "Antorcha" (Gold and Silver Torch) at the "Festival de Vi?a del Mar" held yearly in the "Quinta Vergara", at the seaside resort of Vi?a del Mar, where he once had to sing in three different, sold-out venues in the same night.

In the 1980s, Adamo's career faltered, as the style of his music was no longer fashionable. Since the 1990s, however, and on the crest of a nostalgia wave, Adamo has successfully resumed composing, issuing records and touring, starting with a full season at the Casino de Paris venue in April 1990. Adamo has sold over 100 million copies of recordings worldwide.