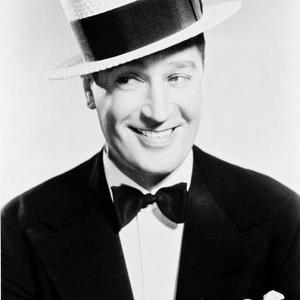 Early Life He was born in Paris, France in 1888. His father was a house painter. His mother was of Belgian descent. Maurice made his name as a star of musical comedy, appearing in public as a singer and dancer at an early age. It was in 1901 that he first began in show business at the age of 13. He was singing at a cafe for free when a well-known member of the theatre saw him and suggested that he try out for a local musical. He did so, and got the part.

He was born in Paris, France in 1888. His father was a house painter. His mother was of Belgian descent. Maurice made his name as a star of musical comedy, appearing in public as a singer and dancer at an early age.

It was in 1901 that he first began in show business at the age of 13. He was singing at a cafe for free when a well-known member of the theatre saw him and suggested that he try out for a local musical. He did so, and got the part. Chevalier got a name as an imitator and singer. His act in l' Alcazar in Marseille was so succesful he made a triumphant rearrival in Paris.

In 1909 he became the partner of the biggest female star in France at the time, Fr?hel. However, due to her alcohol and drug addiction their liason ended in 1911. Chevalier then started a relationship with the 23 year old Mistinguett at the Folies Berg?re; they would eventually play out a very public romance.
[edit]

Chevalier fulfilled his army service in 1913 and therefore couldn't escape the draft when in 1914 World War I broke out. He was shot in the back in the first weeks of combat and taken as war prisoner in Germany for two years. In 1916 he managed to escape due to Minstinguett's numerous relations.

In 1917 he became a star in le Casino de Paris and played before a public of English soldiers and Americans. He discovered jazz and ragtime and started thinking about touring in the United States. In prison camp he studied English and therefore had a certain advantage, compared with other French artists. He went to London where he met a new succes, even if he still sang in French.

After the war Chevalier went back to Paris and created several famous songs who are still known this day, such as "Valentine" (1924). He played in a few pictures and made a huge impression in the operette, "D?d?". Here he met the American composers George Gerschwin and Irving Berlin and brought "D?d?" to Broadway in 1922. It was not a succes due to a mental breakdown. A sad Chevalier returned to France where he tried to commit suicide in 1924, because of this failure. The same year he met Yvonne Vall?e, a young dancer, who became his wife in 1927.

When sound made it's entree in the film world, Chevalier returned to Hollywood in 1928 and this time he became very succesful. He signed a contract with Paramount and played his first American role in "Innocents of Paris". In 1930 Chevalier was nominated for the Academy Award for Best Actor, for two roles: The Love Parade and The Big Pond. He collaborated much with film director Ernst Lubitsch.

In 1934 he played in the operette La Veuve Joyeuse, one of his most well known films. He became one of the several big stars in Hollywood, very rare for French artists in these days. In 1935 he signed for MGM and returned to France later that year.

In 1937 he divorced from his wife and married with the dancer Nita Raya. He encountered several other succesful performances such as his revue "Paris en Joie" in the Casino de Paris. A year later he performed in "Amours de Paris]]. His songs remained big hits, such as "Prosper" (1935), "Ma Pomme" (1936) and "?a fait d'excellents fran?ais" (1939)

During World War I Chevalier kept performing for audiences, even German militaries. He admired Henri P?tain, who led the collaborating Vichy regime during the war. (It must be stated that many Frenchmen at that time admired P?tain for his victories in World War I.) He moved to Cannes where he and his jewish wife, Nita Raya, lived and from where he kept giving several performances.

In 1941 he performed a new revue in the Casino de Paris: "Bonjour Paris", which was another smash succes. Songs like "?a sent si bon la France" and "La Chanson du ma?on" became other new hits. The nazis asked Chevalier if he wanted to perform in Berlin and sing for the collaborating radio station Radio-Paris. He refused, but did give several performances in front of prisoners of war in Germany where he succeded in liberating 10 people in exchange.

In 1942 he returned to Bocca, near Cannes, but returned to the French capital city in september. In 1944 when the Allied forces freed France, Chevalier was accused of collaboration. Even though these claims were disputed and he was formally acquitted of these charges, the English speaking press remained very hostile and even refused to give him a visa for several years.
[edit]

In his own country, however, he was still very popular. In 1946 he divorced from Nita Raya and starting writing his memoires, who would be further completed over the years. He started to paint and collect things and acted in Le Silence est d' Or (1946) by Ren? Clair. He still toured throughout the United States and other parts of the world and returned to France in 1948.

In 1949 he performed in Stockholm on a communist benefit against nuclear arms. (In 1944 he had already participated to a communist defil? in Paris). Anti-communist witch hunts in the US made him therefore persona non grata in this country during the early fifties.

In 1952 he bought a large proporty in Marnes-La-Coquette, Paris and named it "La Louque", as a hommage to his mother's nickname. He started a new relationship in 1952 with Janie Michels, a young divorced mother with three children. Being a painter herself she encouraged Chevalier's artistic hobby.

In 1954 Chevalier was welcomed back in the United States. His American success reappeared thanks to the film Ariane (1957) with Audrey Hepburn and Gary Cooper, by Billy Wilder. He rediscovered his popularity with new audiences, appearing in the movie musical, Gigi (1958) with Leslie Caron and Hermione Gingold, with whom he shared the song "I Remember It Well", and several Walt Disney films. The great success of Gigi prompted Hollywood to give him an Honorary Academy Award that same year for his lifetime achievements in the field of entertainment.

After this he continued to perform in public and met celebrities such as Brigitte Bardot and Dwight Eisenhower.

Chevalier continued to work up until very old age with impressive energy and enthusiasm. In the early sixties he toured thru the United States and between 1960 and 1963 he made eight films. When he returned to France he was invited by president Charles de Gaulle for a meal.

In 1965, at the age of 77 he made another world tour and visited again the US and other countries like South Africa. In 1967 he toured in Latin America, again the US, Europe and Canada.

In 1968, on October 1st, he announced his official farewell tour. Tired but nonetheless still able to entertain people he stopped twenty days later.

In 1970, he sang the title song of the Disney film The Aristocats. During a tour in the US he decided to stay there. However in December 1971 he got ill and had to be brought to the hospital.

Maurice Chevalier died on January 1, 1972, aged 83, and was interred in the cemetery of Marnes la Coquette in Hauts-de-Seine, France.