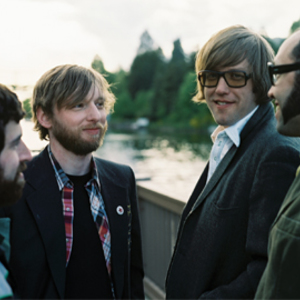 The Long Winters is an American indie rock band based in Seattle, USA. Singer-songwriter John Roderick was born in Seattle, Washington, and moved to Anchorage, Alaska, during his elementary school years. He later returned to Seattle and formed both Bun Family Players and the Western State Hurricanes. Following the collapse of the latter, he acted as touring keyboardist for Harvey Danger. In 2001, Harvey Danger singer/songwriter Sean Nelson suggested that he and Roderick record an album, with half of the songs penned by John and the other half by Sean.

Singer-songwriter John Roderick was born in Seattle, Washington, and moved to Anchorage, Alaska, during his elementary school years. He later returned to Seattle and formed both Bun Family Players and the Western State Hurricanes. Following the collapse of the latter, he acted as touring keyboardist for Harvey Danger.
In 2001, Harvey Danger singer/songwriter Sean Nelson suggested that he and Roderick record an album, with half of the songs penned by John and the other half by Sean. Death Cab for Cutie band member Chris Walla had recently opened the Hall of Justice studio in Seattle and agreed to help them record.

John recruited Joe Bass of Sky Cries Mary and Brian Young of Fountains Of Wayne to flesh out several of the songs, and the album gradually evolved to feature only John's songs. After several months, The Worst You Can Do Is Harm was finished.

John traveled to New York, where he played solo shows and quickly began to write new songs, several of which would be included on the Long Winters's second album, When I Pretend to Fall.

While in New York, John was contacted by Barsuk Records ? the label that would release The Worst You Can Do Is Harm ? who made it clear that they wanted John to promote the release by touring. He returned to Seattle, where he was joined by Chris Caniglia, former Western States Hurricanes drummer Michael Shilling, and Eric Corson on bass. Thus, The Long Winters were born.

Sean Nelson offered to sing harmony vocals on a number of songs at the band's first live gig. He ended up casually performing with the band for their first few shows before committing to full-time enrollment.

The original trio responsible for The Worst You Can Do Is Harm (John Roderick, Sean Nelson, and Chris Walla) is often considered the original incarnation of the band. John and Sean, along with recruits Eric Corson and Michael Shilling (the drummer in Roderick's previous band, the Western State Hurricanes) are the core players behind When I Pretend to Fall, with Sean having replaced Chris Caniglia as the band's keyboardist. When I Pretend to Fall was released and John, Sean, Eric and Michael embarked on an ambitious series of tours throughout 2003 in support of the album. The band toured North America with Barsuk Records labelmates Nada Surf and Death Cab for Cutie, and later spent November touring Europe. Michael Shilling eventually quit in December of 2003, burned out by the hectic touring and lifestyle of the band.
With the best wishes of the Long Winters, Sean left in March 2004 to rekindle his former band.

At the time of Sean's departure, the Long Winters had begun rehearsing with Michael Shilling's replacement for the band's 2004 tours, former Death Cab for Cutie percussionist Michael Schorr. Confronted with a double blow to the band's line-up, John took the opportunity to reinvent the band ? especially with an East Coast tour supporting The Pernice Brothers, a more fleshed out European tour, and a nationwide tour supporting the Decemberists that would take the band through the spring and well into the summer. Thus, the leaner three-piece version of The Long Winters was born, featuring John Roderick, Eric Corson, and Michael Schorr.

This extensive spring/summer 2004 tour took its toll on drummer Michael Schorr, who left the band shortly after its completion. John continued to do small promotional events and shows throughout the latter half of 2004 and 2005, often previewing a handful of new Long Winters songs.

The latest incarnation of the Long Winters features John Roderick on vocals, guitars, and keyboard, Eric Corson on bass and back-up vocals, and Nabil Ayers on drums. The Long Winters toured with Keane in October 2005 in support of an EP released on October 11th, 2005, titled Ultimatum. John Roderick did a solo mini tour through Europe in May 2006 to promote awareness for the third full-length LP, Putting the Days to Bed, which was released on 25 July 2006. In the fall of 2006 the band, now with guitarist/keyboard player Jonathan Rothman replacing Michael Squires, toured the USA, after which they joined Keane once again for a European tour. Listed among the hardest touring bands in music, the Long Winters begin 2007 with yet another European tour, followed by a month of shows in the USA and Canada.

Putting The Days To Bed

When I Pretend To Fall

The Worst You Can Do Is Harm