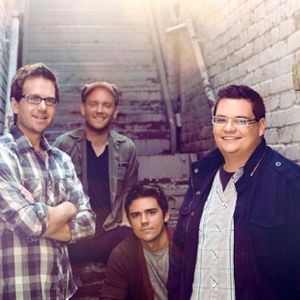 Here is some background information on Sidewalk Prophets from the You Love Me Anyway Songfacts: Sidewalk Prophets is a Contemporary Christian music band from Nashville, Tennessee. The band consists of lead vocalist David Frey, rhythm guitarist Ben McDonald, lead guitarist Shaun Tomczak, bass guitarist Cal Joslin and drummer Justin Nace. They initially made a name for themselves at Indiana's Anderson University where Frey and McDonald met.

After signing with Word Records, Sidewalk Prophets released their debut studio album These Simple Truths on August 25, 2009, which earned the group the 2010 GMA Dove Award for New Artist of the Year. In July 2011 the third single released from the set, You Love Me Anyway, became their first #1 on the Billboard Christian singles chart. They released their second major album, Live Like That on March 2012.

The Sidewalk Prophets are an unlikely group of poets, musicians, and fun-lovers who have been brought together by the blood of Jesus Christ to share the hope, faith, tragedy, and love that is the reality of Christianity. For over 5 years the Sidewalk Prophets have been traveling across the United States and overseas sharing the redeeming love of Jesus Christ. They are armed with a dynamic songwriting duo comprised of college dorm mates turned best friends David Frey and Ben McDonald. Frey is equipped with an unrivaled vocal range and a distinct soulful voice that is full of engaging passion. McDonald brings an undeniable drive and passion for writing songs that will engage both churched and unchurched listeners.

The band has been hitting the road hard for the past 3 years playing 125+ shows a year worldwide. They've been making thousands of friends and fans in the process. Along the way the band has achieved some longtime goals of playing with bands they looked up to as teenagers. The band has had the honor of sharing the stage with acts like Jeremy Camp, Audio Adrenaline, Stellar Kart, Building 429, and Ginny Owens as well as many others.

The Sidewalk Prophets main focus is to make young people feel comfortable being who God has created them to be. Young people today more than ever have the task of living in a world that places so much value on fitting in and achieving the perfect image. The band travels with the slogan ?Image is nothing?love is everything.? Dave from the Sidewalk Prophets explains the bands vision like this, ?We have traveled all over the United States working with young people and there is one resounding problem that we run into. The problem is that our young people are being pressured to live up to the world's standard of success. The world is selling the idea that image is everything but we know that the only way this can be true is by helping God's children young and old realize that an image molded after Christ is the only image worth striving for.?

The Sidewalk Prophets have had appeal not only to young people but to their parents and grandparents as well. Their musical pallet includes an eclectic group of influences from past to present which allows the band to connect with almost anyone who listens. Their sound is a melting pot which culminates into an original blend of acoustic rock music. Their shows bring the depth of a singer/songwriter and the energy of a rock & roll band. In June of 2007 the band packed up their bags and headed south to Nashville, TN in hopes of expanding their platform to do ministry.

After releasing a full-length album and EP independently, they made their major-label debut with "These Simple Truths" in August 2009.

The Things That Got Us Here

Merry Christmas To You