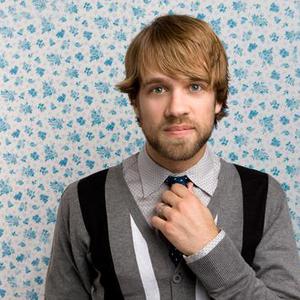 Drawing on musical influences as diverse as pop, folk, and good old-fashioned rock ?n' roll, Josh Wilson's Life Is Not A Snapshot creates a rollicking atmosphere of electrically charged sonic satisfaction. From the jangling guitars on ?Sing,? to the thought-provoking cadence of ?Before The Morning? and the Beatle-esque strains of ?Do You Want To Know,? Josh creates melodic flights of fancy that take you on a journey beyond what is to what should be.

Fans will be compelled to sing along with his little-bit-rock ?n' roll treatment of ?Listen,? tap their toes to ?How To Fall,? and ponder along with the intimate ballad, ?Right in Front of Me.? On his richly textured, gently nuanced performance of the world's most famous hymn, ?Amazing Grace,? Josh Wilson directs listeners beyond the performance and toward the Giver of all good gifts.

?We may live in snapshot moments,? Josh says, ?but those moments are not Life. Life is not one point in time but all of the points in time between drawing our first and last breaths. Because we have experienced the faithfulness of God in the past we can be secure in the present and trust in the One who holds the future.?
There is a school of thought that dictates what a typical rock star bio should look like. Open with a snappy quote to catch the reader's attention. Include a laundry list of accolades, weighty references to his current standing on the album sales and radio charts as well as testimonials from well-respected industry insiders regarding his future greatness. Convince the reader that the artist in question is successful, talented and - in the case of Christian rock stars -considerably more spiritually creative than the average Joe who occupies the pew next to you on any given Sunday.

Josh Wilson simply smiles and shakes his head at the absurdity of it all. You see, Josh Wilson is not a rock star - never has been; doesn't intend to be. So if you are looking for one, you'll just have to look someplace else.

That's not to say Josh isn't an incredibly talented singer/songwriter with numerous accolades and a brilliant future ahead of him. His debut album, Trying to Fit the Ocean in a Cup, resonated with a growing legion of fans across the nation, spawning the Top 10 radio hit, ?Savior Please,? while launching him on tours with such celebrated artists as Big Daddy Weave and Matthew West. And though he would deny charges of being a guitar prodigy, Josh's mesmerizing abilities have elicited awed comparisons, with terms like ?Keaggy-esque' being bandied about.

?Please don't hang that on me,? Josh smiles. ?Playing guitar is a passion for me, and I do enjoy playing. But you never arrive. You never become the best, and that's not what I'm trying to do anyway. I want to take some lessons and brush up on my playing because honestly, I'm a little rusty.?

A little rusty for someone who studied under the tutelage of classical guitar legend, David Brandon, is like firing on all cylinders for the rest of the guitar-playing world. As phenomenal as his musicianship is, it is the lyrical integrity of his songs that remains Josh Wilson's magnificent obsession, though he admits to wrestling with words like Jacob with the angel and sometimes walks away from his own songwriting sessions with a limp.

?I have a passion for songwriting, but I don't think I would say that while I am in the middle of writing a song,? Josh muses. ?Songwriting is hard work, and I'll procrastinate and avoid it at all costs. It is absolutely the ground fighting back against man's efforts to till the soil. Melodies come to me a lot easier than words, but lyrics are where the weight of the song is. The melody may stick in someone's head, but eventually they are going to start thinking about the words. That's why I feel so much pressure. Ultimately, it doesn't matter if you write a good song with a great hook if the words are meaningless. It is a daunting task and a big responsibility. I do not to take it lightly.?

That undeniable tension between the words and music emerges as a focal point of Josh's sophomore CD, Life Is Not A Snapshot. This seven-song collection of contemporary theological musings reflects Josh's remarkable penchant for framing cold and calculated questions of faith into wild, unbridled musical expressions of trust.

?I am a pastor's kid and grew up in the church,? Josh explains. ?I don't remember a time when I didn't believe in Jesus, but my faith was never really challenged until I went to college. During my freshman year, I encountered people who were nice and smart, but who didn't believe what I believed, and they started to challenge my faith. I didn't have the foundation I needed to come up against those questions. A lot of things that I thought I knew started to fall apart. The Lord picked me up and said, ?There are good answers to these questions, but you're going to have to do some searching and praying and ask some smart questions yourself to figure out why you believe what you believe.'?

Hard work and seeking answers became a passion for the young singer/songwriter, and his songs have become richer as a result. In the two years since his critically acclaimed debut release, Josh has discovered a marked clarity regarding his vision and mission for his music, and it is aimed squarely at followers of Christ.

?I feel like I am called to challenge and encourage the Church,? he declares. ?I want to make people think, particularly about why they believe what they believe. As soon as your faith is challenged, that is when you'll realize that Sunday school answers are not enough. Hopefully I can encourage people to dig deeper into their faith.?

That Was Then, This Is Now

Life Is Not A Snapshot

Trying To Fit The Ocean In A Cup