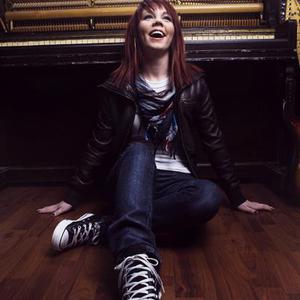 Worship leader. Song writer. Gifted artist. Prayer warrior. Prayer needer. Advocate for her generation. Intercessor for her generation. Next big thing. Sarah Reeves has been called all these things, and with good reason ? the 19 year-old Alabama native is a complex composite of each of these traits and so much more. She is fashionable, she's commonplace, she's demure, she's shy, she's outspoken, she's sensitive, she's bubbly, she's pensive, she's completely engaging ? and that's before her first cup of coffee.

Sarah Reeves has been called all these things, and with good reason ? the 19 year-old Alabama native is a complex composite of each of these traits and so much more. She is fashionable, she's commonplace, she's demure, she's shy, she's outspoken, she's sensitive, she's bubbly, she's pensive, she's completely engaging ? and that's before her first cup of coffee.

Born into a family of musicians, Sarah knew from an early age that music would be her career. With a father who was well-respected in the mainstream music business, she naturally assumed she would follow in his footsteps. But a radical encounter with God at a youth camp when she was 15 years old forever changed Sarah's focus.

"For the first time in my life I saw people excited about worshiping God, people who were pursuing God with all their hearts," Sarah declares. "I longed for that kind of relationship with God. During that week, God messed up my whole perspective on worship. He humbled me. He filled me with the Holy Spirit. He called me to be a worship leader. He told me, 'Life is not about you, Sarah. Life is about Me. From this point on you will live to glorify My name, to reach people, and lead them into My arms.' My life has not been the same since that day."

The wide-eyed ing?nue immediately joined the youth worship band and started leading worship at her church youth group. A combination of hard work, natural talent, finger-on-the-pulse songwriting, and an obvious sense of calling resulted in the band's expanding regional reputation for inspiring teens to respond to the call to worship.

Although Sarah was content to lead worship out of the limelight, anonymity was not to be her lot in life. After performing an opening set for Plumb, a demo of her songs found their way into Tiffany Lee's hands. "The next day she called the house," Sarah's sapphire eyes sparkle at the memory. "She and her husband introduced me to Sparrow Records and the rest, as they say, is history."

What Sarah doesn't say is that history has involved writing sessions with some of Nashville's most sought after songwriters including Jason Ingram, Ed Cash, Mia Fields, Scott Davis, Ben Glover, Cindy Morgan, and Marc Byrd, which resulted in more than 70 finished songs from which to assemble her debut CD, Sweet, Sweet Sound. Nor does she mention recording sessions with powerhouse producers Ian Eskelin and Matt Bronleewe, or the whirlwind radio and promotional tours that are part and parcel of the music industry. It's enough to turn a girl's head if she doesn't have her feet firmly planted on the ground and her faith firmly rooted in the Word.

"Sweet, Sweet Sound," the title cut, serves as an excellent primer for Sarah's music and ministry. The breezy, lilting, worship-inducing track is distinguished by Sarah's sweet vocals. There is an abandonment in her songs that compels listeners to dive deep into worship with her. Scripturally grounded songs like the rock-inflected, "Fresh Anointing," and yearning prayer songs like the sweetly melancholy piano ballad, "Come Save," flow in a seamless warp and weave to produce a beautiful tapestry of praise and adoration. The latter, a stand-out track inspired by 2 Chronicles 7:14, is a fervent plea for God's intervention in a broken world. As Sarah explains, "I want this world to know the unconditional love of Jesus. This is a cry of desperation that God would come save our land." Drawing on the grounding influences of family and friends where she is 'just Sarah,' and buoyed by the mentoring of Tiffany Lee, whom she credits with helping her avoid the pitfalls inherent to the music industry, Sarah is ready to expose her heart for worship to a broader platform.

"I have one goal and one true destiny," Sarah Reeves declares with an urgency that is palpable, "and that is to bring people to the heart of God, to help them understand His love, His mercy, and the freedom and power of worship. My goal is to lead the nations into His arms. That's my calling."

If such a bold declaration from one so young makes you fold your arms and paste a skeptical smirk across your face, Sarah's sweet, dimpled smile will immediately disarm you. A sampling of her music will convince you of her sincerity, and an examination of her lyrics will reveal a heart far older and wiser than her years.

"God called me to be a worship leader when I was 15 years old," Sarah insists. "I've stood on that calling ever since. It takes a lot of prayer to lead worship. It means being the same off-stage as I am on-stage. I realize I'm still a little girl in a great big world. I understand that I am still na?ve. But I believe the Bible is true when it says to let no man despise your youth. I have made mistakes and learned from those mistakes. The important thing is to keep my mind on the Word of God, to be true to who I am, and to keep growing."