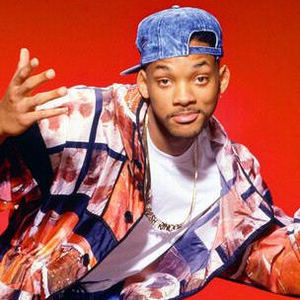 Willard Christopher Smith II (born September 25, 1968) is an American Oscar nominated actor and a multiple Grammy winning hip hop artist. He is one of few people who have enjoyed legitimate success in the three major entertainment media in the United States: film, television, and the music industry. Will Smith was born and raised in West Philadelphia. He spent most of his days in a playground, training basketball and relaxing all cool.

Will Smith was born and raised in West Philadelphia. He spent most of his days in a playground, training basketball and relaxing all cool. Career-wise, he started as the vocalist of the hip-hop duo DJ Jazzy Jeff & The Fresh Prince, with his childhood friend Jeffrey "DJ Jazzy Jeff" Townes as turntablist and producer. The duo was known for performing humorous, radio-friendly songs, most notably "Parents Just Don't Understand" and "Summertime." They gained critical acclaim for winning the first ever Grammy in the Rap category (1988).

Smith was a charismatic and energetic performer but he was nearing bankruptcy when in 1990, the NBC television network signed him to a contract and built a sitcom, The Fresh Prince of Bel-Air, around him. The show was successful and helped revitalize his career

Although he made a notable dramatic film debut in Six Degrees of Separation (in which he played totally against type as a gay con man) while still appearing in The Fresh Prince of Bel-Air, Smith's film career took off with his role in Bad Boys (1995) along with co-star Martin Lawrence.

After The Fresh Prince of Bel-Air ended in 1996, Smith began a successful solo music career while simultaneously starring in a series of films. The first two films were hugely successful summer blockbusters: Independence Day (1996), in which he played a fearless and confident fighter pilot, and Men in Black (1997), where he played the comic and confident Agent J against Tommy Lee Jones's deadpan Agent K. Smith's acting in Men in Black won critical praise. The two films established Smith's commercial reputation as a bankable star whose appeal across age, race, and gender lines could "open" a film at the box office. Because his movies usually open during the July 4th weekend, many people have come to call a July 4th weekend in which Will Smith stars in a movie "Big Willie Weekend."

Lead roles in Enemy of the State, Wild Wild West, Ali, Men in Black II Bad Boys II and "I, Robot" then followed. He also starred in 2005's Hitch. (Like Smith, Hitch co-star Kevin James starred in a sitcom named for royalty, The King of Queens.) His 2006 role is that of Chris Gardner in the "inspired by a true story", "The Pursuit of Happyness" was nominated for, "Best Performance by an Actor in a Leading Role" an Oscar in 2007. Smith's son Jaden also stars in the movie.(Jaden Smith as of 2010 lately played the lead role of Dre Parker in the 2010 remake of "The Karate Kid".) Will Smith's latest acting role was "Seven Pounds" in 2008 where he played Ben Thomas an IRS agent. Since then he's been producing movies that include, "The Karate Kid"(2010), "The Human Contract"(2009), and "Lakeview Terrace"(2008)

Smith was nominated for an Academy Award for Best Actor for his portrayal of the boxer Muhammad Ali in Ali.

Smith also released a string of hit singles, often associated with his most recent film, throughout the late 1990s. The most notable of these were his #1 hit theme song "Men in Black," the #1 hit "Gettin' Jiggy Wit It" (which made jiggy a catchphrase for a while in 1998), and "Just the Two of Us," an affecting message to his young son. His first two solo albums went platinum, but his third, on Columbia Records, was a sales disappointment compared to his past efforts, and after a quick Greatest Hits release that was almost not advertised at all, he was dropped by the label. He signed a recording contract with Interscope Records and released the successful Lost and Found in 2005. The album was propelled solely on the smash hit single, "Switch," which appealed to the mainstream media ala "Summertime." The single stayed atop the charts for months and returned Smith to the forefront of Hip Hop.

On July 2, 2005, Smith served as host for the Live 8 concert in his native Philadelphia before an enormous crowd, and later performed a set with DJ Jazzy Jeff.

Smith married actress Sharee Zampino in 1992. They had a son, Willard Christopher III, also known as "Trey", but divorced in 1995. Smith married actress Jada Pinkett in 1997. Together they have two children: Jaden Christopher Syre (born 1998) and Willow Camille Reign (born 2000). Along with his brother, Harry Smith, he owns Treyball Development Inc., a Beverly Hills-based company named after his first son. He has been consistently listed in Fortune Magazine's "Richest 40" list of the forty wealthiest Americans under the age of 40.

Will Smith has been criticized for his lip service to his home town of Philadelphia, PA. Several of his songs talk about parts of Philadelphia and the surrounding areas. While he has spoken over the years about how much he loves the city and how much he wants to give back, none of his proposed ventures in the city of Philadelphia have ever been developed. He has proposed opening a restaurant, several upscale bars, and a community center in Philadelphia which have never seen development.