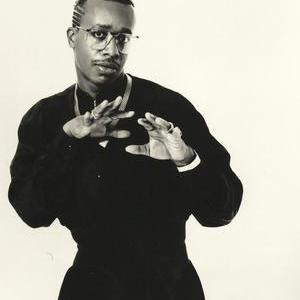 MC Hammer (born Stanley Kirk Burrell on March 30, 1962) is an American MC who was popular during the late 1980s and early 1990s, known for his dramatic rise to and fall from fame and fortune and his trademark Hammer Pants. He became a preacher in the 1990s and now works as a television show host and CEO. He lives in Tracy, California, with his wife Stephanie and six children, three boys and three girls.

His debut album Feel My Power was produced between 1986 and 1987 to be released independently in 1987. It was produced by VEH (of Con Funk Shun), and sold over 60,000 copies. In the spring of 1988, a DJ played the track "Let's Get it Started"?a song in which he declared he was "...second to none, from Doug E. Fresh, Cool LL, or DJ Run"?after which the track began to gain popularity in clubs. Hammer received several offers from major record labels after the successful release of the independent album.

Hammer initially refused to sign a contract with Capitol Records, but after a substantial signing bonus was added to his contract, he did. His debut album was then re-released as Let's Get It Started. A new video was shot for "Let's Get it Started," and another video was produced in fall of 1988 called "Pump It Up" (a new track added to Let's Get It Started). The "Pump It Up" video was added to the roster of "new wave" hip-hop videos that premiered or re-aired on the premiere season of Yo! MTV Raps. It depicted hip-hop legends Run-DMC getting disrespected by Hammer. The album eventually went triple-platinum (more than 3 million units sold). "Turn This Mutha Out" (the album's biggest hit), "Feel My Power", and "They Put Me in the Mix" saw heavy rotation on R&B/Hip-Hop radio stations throughout late 1988 into 1989.

His second album, 1990's Please Hammer Don't Hurt 'Em, included the smash single "U Can't Touch This", which sampled Rick James' 1981 hit "Super Freak". Interestingly, despite heavy airplay, "U Can't Touch This" stopped at #8 on the Billboard Hot 100 chart due to the fact that it was released only as a twelve-inch single. Follow-up hits included "Have You Seen Her" (cover of the Chi-Lites); and "Pray", which had a beat sampled from Prince's "When Doves Cry" and was his biggest hit in the US, peaking at #2. The album went on to become the first hip-hop album to reach diamond status, selling more than 10 million units.During 1990 Hammer toured extensively in Europe which included a sold-out concert at the National Exhibition Centre in Birmingham. With the sponsorship of PepsiCo, PepsiCo International CEO Christopher A. Sinclair went on tour with him in 1991. At the same time, he also appeared in The West Coast Rap All-Stars posse cut "We're All in the same Gang".

The Addams Groove Songfacts that in 1991 Hammer recorded the theme for the launch of the 1990s run of the Addams' Family film series, which introduced a whole new generation of fans to the Addams Family franchise. MC Hammer was still on the rise, and having a rap artist do the theme song added a contemporary feel to the movie, which was based on a '60s TV series about a very creepy family.

Hammer's relationship with Suge Knight dates back to 1988. Hammer next signed with Death Row Records, then home to Snoop Dogg and his close friend, Tupac Shakur. The label did not release any of Hammer's music while he was with them. However, Burrell did record music with Shakur, most notebly the song "Too Late Playa", and the album (Too Late) he recorded leaked onto the internet some years later. Their collaborative efforts are yet to be released. After the death of Shakur in 1996, Burrell left the record company.

In 1996, Burrell and Oaktown signed with EMI, which saw the release of a compilation of Hammer's chart topping songs. The album, Greatest Hits, featured 12 former hits and was released in October, only six months after his bankruptcy.

In 1997, just prior to beginning his ministry, MC Hammer (who by that time had readopted the "MC") was the subject of an episode of The Oprah Winfrey Show and the VH1 series Behind the Music (music from his previous album was featured in this documentary). In these appearances, Burrell admitted that he had already used up most of his fortune of over $20 million, proving that money is nothing if it doesn't bring peace.

In 1998, MC Hammer released his first album in his new deal with EMI, titled Family Affair because it was to introduce the world to the artists he had signed to his Oaktown Records as they made their recording debut. This album was highly plugged on Trinity Broadcasting Network but featured no charting singles, and sold only 500,000 copies worldwide.

In 2001, MC Hammer released his 8th studio album, Active Duty, to pay homage to the ones lost in the September 11, 2001 terrorist attacks. The album followed that theme, it featured two singles, "No Stoppin' Us (USA)," and "Pop Yo Collar." The album, like its predecessor, failed to chart and would not sell as many copies as previous projects.

After leaving Capitol Records and EMI for the second time in his career, MC Hammer decided to move his Oaktown imprint to an independent distributor and released his ninth studio album, Full Blast, in 2003. The album would feature no charting singles and failed to certify in the RIAA. A video was produced for Full Blast, a song that attacks Eminem and Busta Rhymes.

After going independent, he decided to create a digital label to release his tenth studio album, Look Look Look. The album was released in 2006 and featured production from Scott Storch. The album featured the title-track single, and would sell much better than his previous release (300,000 copies worldwide).

Between 2006 and 2007, Hammer released a military-inspired rap song with a political message to President George W. Bush about sending the American troops back from war, called "Bring Our Brothers Home". The video was filmed at the Santa Monica Pier.