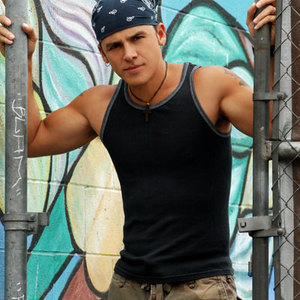 Gerardo or "la Pelota" (born Gerardo Mej?a on April 16, 1965 in Guayaquil, Ecuador) is a rapper and singer who later became a recording-industry executive. He has based his career in Los Angeles since his family moved to Glendale, California, at the age of 12. He became known for his bandana, skintight jeans and shirtless torso. He sometimes refers to himself as the "Latin Elvis" or the "Latin Frank Sinatra".

Gerardo's first appearance in show business was when he played the character "Bird" in the 1988 film Colors, about South Central Los Angeles gang violence. This was also the first time his dance skills were showcased, in one of the party scenes; however, he did not sing at any point in the film.

Gerardo became a chart-topper after issuing a single called "Rico Suave," which was featured in his 1991 debut album, Mo' Ritmo; in addition, the album contains a cover of George Clinton's "Give Up the Funk (Turn This Mother Out)." Chuck Reed produced his following album, Dos, in 1992.

Gerardo established himself as one of the first breakthrough Latin dance performers singing in the English/Spanish mixture known as Spanglish. After releasing 1994's Asi Es and 1995's Derrumbe, the Latin rap artist returned in 2001 with Fame, Sex y Dinero, which features the hit single "Sigo Siendo Rico." Besides the 1988 film Colors, Gerardo also appeared in the 1987 film Can't Buy Me Love.

Now an A&R executive at Interscope Records, Gerardo was responsible for bringing Enrique Iglesias to the United States in 1998, and signing rapper Bubba Sparxxx [2].