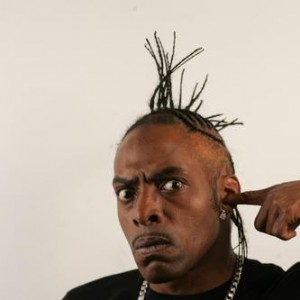 Coolio (born Artis Leon Ivey, Jr. on August 1, 1963 in Compton, California) is an American rapper and actor whose G-Funk sounding beats and funky flow make listening very pleasant. Coolio started his career as a member of the rap group, WC And The Maad Circle. In 1994, Coolio released his debut album It Takes a Thief which featured the hugely successful singles, Fantastic Voyage and It Takes a Thief.

In 1994, Coolio released his debut album It Takes a Thief which featured the hugely successful singles, Fantastic Voyage and It Takes a Thief. In 1995 Coolio released his second and most successful album Gangsta's Paradise, which went 4X Platinum and featured the mega hit, Gangsta's Paradise and the popular party track, Sumpin New. The album 'Gangsta's Paradise" is considered by some to be a classic west coast Gangsta rap album, thanks to songs like Exercise Yo Game and Geto Highlites. His G-Funk sounding beats and soulful flow softens the typically edgy effect of rap. His hit song "Gangsta's Paradise" combined singing with rap. Coolio's recordings also appeared on the soundtracks to Clueless (1995) and Dangerous Minds (1995).

However, Coolio's next few albums, 1997's My Soul, 2002's El Cool Magnifico and 2006's Return Of The Gangsta, failed to live up to the success of his first two albums.

In 2009 he released the album From the Bottom 2 the Top. He also took part in the reality TV show "Celebrity Big Brother" in the UK, in which he placed third. He returned to Big Brother UK in 2010 to take part in Ultimate Big Brother - the last ever series of the reality show

From the Bottom 2 the Top

The Return Of The Gangsta