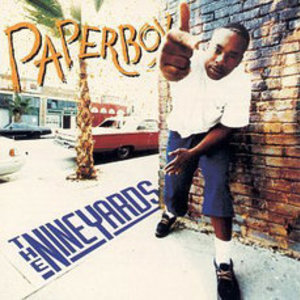 Paperboy (born Mitchell Johnson in Oakland, California) is a 1990s rapper best known for single Ditty, which sampled Zapp's R&B classic Doo Wa Ditty (Blow That Thing) and became a hit after being remixed by DJ/Producer Ben Liebrand. In 1993 he released the album The Nine Yards which contained 10 tracks, including the platinum certified single Ditty. Rhythm D produced The Nine Yards which was certified gold by the RIAA on June 22, 1993. The single Ditty was certified platinum on May 11, 1993.

Paperboy's album The Nine Yards was followed by two additional albums City to City and The Love Never Dies. City to City, an 18 track album, was released in 1996 under the rap label Next Plateau and spawned the hit "P's Cure".
Paperboy's 2004 release titled The Love Never Dies was released under the label Thump Records. Rhythm D is back once again along with Big Keys as the noted producers. This album marked a change in the rappers traditional style through his utilization of artists and producers from other areas in his home state of California and also seeking talent in other areas of the United States. The first track titled California bears the sound of a classic West Coast style track and features the artist Battlecat, a fellow California artist. Rhythm D's presence is felt heavily throughout the album with his unique producing talents.

The most notable collaboration on this album is one with the city of Little Rock, Arkansas. The updated sound seen in The Love Never Dies is a result of Paperboy's connections with the Little Rock producer Big Keys. Big Keys of Key Ingredient Music produced several tracks on the album including They On Me, I'm Still Yo' Dude, and Got Doe. Paperboy gives reference in the track I'm Still Yo Dude to a California record label executive that is credited with matching the talents of producer Big Keys, Paperboy, and Rhythm D and then arranging their work together on the production of this album. The company referenced is Lockdown Records, an independently owned and operated label working out of the central valley area of California. Lockdown Records is headed by record executive Ace Vargas. He is the man credited with matching the talents of the artist and producers and jumpstarting their relationship by exposing key opportunities for the companies.

Little Somethin' For The Summer (MCD)