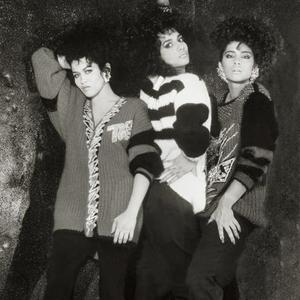 The Cover Girls is a New York City-based Latin Freestyle, R&B, Dance, Pop trio, the brainchild of music promoter Sal Abbatiello. In 1987, the trio consisted of Dominican-American Louise Sabater (who is also known as Angel Clivill?s), Caroline Jackson and Sunshine Wright. They were the one of the first acts to bring freestyle music to the pop charts, having a string of moderate hits in the late eighties.

In 1989, Wright was replaced by Margo Urban and more hits followed. Their sophomore album "We Can't Go Wrong" includes the lead single "My Heart Skips a Beat" climbed to #38. The ballad title track "We Can't Go Wrong" became their first Top 10 hit, peaking at #8.

By 1992 the trio had more lineup chages: Jackson was the only remaining original member. New members were Evelyn Escalera and Michelle Valentine. Preceeding the released of The Cover Girls third album, "Here It Is", they scored their second Top 10 hit followed ("Wishing On A Star" #9 Pop & #7 Dance) and "Thank You" (#75 Pop). The albums' other singles are "Don't Stop Now" (#63 Pop & #8 Dance) and by "Funk Boutique" (#55 Pop & #8 Dance) and "If You Want My Love (Here It Is)" (#8 Dance). "Don't Stop Now" is noted as the first song to feature the lead vocals of Evelyn Escalera.

With the release of The Cover Girls' fourth album "Satisfy" in 1996, the lead vocal duties were performed by Michelle Valentine. The line up included members Damie, Gayle and Shelia for this album only. The singles from this album are "I Need Your Lovin'" and "I Am Woman." The group went on hiatus after the release of "Satisfy." The Cover Girls became active again in 2001 with the longest running member of the group Evelyn lead singer. She is joined by Lorraine Munoz and Sabrina Nieves who both joined the group in 2001. In April 2010, a single titled "Better Late Than Never" was released. It is unknown if a fifth album by The Cover Girls will be released.

Sabater has had solo success on the Hot Dance Music/Club Play chart as Angel Clivill?s.