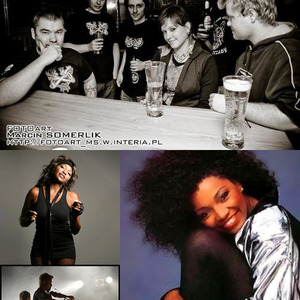 1) A pseudonym of Brenda Shannon Greene (b. 1958 in Washington, DC, USA), the disco artist who released Let The Music Play (Jul 1983), hitting gold with this trend-setting, pulsating dance classic & others similar.

She grew up in Brooklyn & whilst at college, joined the New York Jazz Ensemble as a singer, subsequently meeting drummer Lenny White & sang with Brownstone (a group she started with Russell Taylor), leading to some recording. Her first single, "Let the Music Play" (issued as a 12" on Emergency, New York). Produced by Mark Liggett & Chris Barbosa - the track's upfront heavy, staccato beats & synth bass, marked it as an electro single, The record became a monster club, pop & world hit, pumping its way to #8 pop, on the Billboard chart, selling sold eight million copies. Her d?but album, Let the Music Play (Feb 1984), went gold, peaking at 32 pop (Mar 1984). She followed that with the Top Ten rnb hit Give Me Tonight & My Heart's Divided.

Do You Wanna Get Away (May 1985), was Shannon's second Mirage album - The title track single hit number 13 R&B in spring 1985. Her third album Love Goes All the Way was released on Atlantic in 1986, with the singles "Dancin'" "Criminal" and "Prove Me Right" Shannon's dominated the dance floor for a decade. Known as the international Dance Queen of the World. A decline in her career because some litigation surrounding "Let the Music Play", the decline of dance-oriented radio stations, the loss of club airtime on mainstream radio stations, and the inevitable "Let the Music Play" sound-alike clones that surfaced. Nevertheless, Shannon appeared on a 1999 segment of VH1's Where Are They Now, vowing to return to the top of the charts; the following spring she released the album The Best Is Yet to Come." (Taken from the biography by Ed Hogan.)

2) A Polish Irish folk band, founded in 1994. They have so far recorded five albums, one soundtrack, and also composed some music for an Irish dance show. Shannon perform in about a hundred concerts every year mainly in Europe. Over the years they have played in many festivals, including
Rainforest World Music Festival (Malaysia, 2005); Celtica 2005 (Italy); Folk Fiesta (Poland). Shannon have also taken part in celebrations of the Interceltique Festival du Lorient in Britany (France) as well as often performing in Denmark and Germany. Shanon on occasion have also played with other well-known musicians, including Polish jazz violinist Michal Urbaniak.

Love Goes All The Way

Do You Wanna Get Away