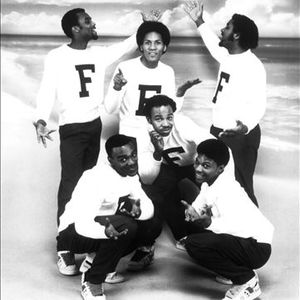 Force MD's (M.D. being an initialism for "Musical Diversity") was a highly popular hip-hop group of the 80s. They were mainly influential in the street hip-hop scene and were one of the first vocal groups to fuse hip-hop beats with doo-wop-influenced harmonies. They are probably most remembered for their 1986 love song "Tender Love." History The group was formed in 1981 in Staten Island, New York, and were at first known as the L.D.s.

The group was formed in 1981 in Staten Island, New York, and were at first known as the L.D.s. They began performing on Greenwich Village street corners and the Staten Island Ferry. The group consisted of brothers Stevie D. and Antoine "T.C.D." Lundy, their uncle, Jessie Lee Daniels, and friends Trisco Pearson and Charles "Mercury" Nelson. After they connected with DJ Dr. Rock, they also formed as Dr. Rock & The M.C.s and played at hip hop shows.

The Force M.D.s made a record deal with Tommy Boy Records in 1984; recognized by their street attitude, they had developed into a pure urban R&B group. They produced several R&B hits through out the '80s, including "Itchin' for a Scratch," but their most notable and only pop hit was "Tender Love." Written by the super songwriting team of Jimmy Jam and Terry Lewis, the song was featured in the 1985 feature film Krush Groove, and is remembered for the beauty of its lyrics and the hypnotical rhythm backing the vocals. This song would be their only top ten hit on the U.S. Billboard Top 100.

The Force M.D.s' then scored their first R&B #1 hit in 1987, "Love Is A House", from their third album Touch And Go. However, their popularity began to fade the next year, before a fourth album Step To Me released in 1990.

Tragedy struck the group twice with the passing of two of its members: Nelson suffered a fatal heart attack, and TCD died of Lou Gehrig's disease in 1998. There was another member named Double E who sung 6 songs.

Let Me Love You: The Greatest Hits