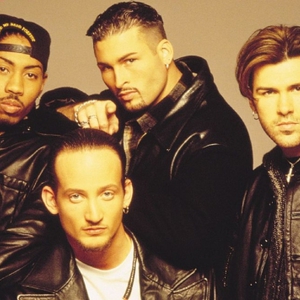 Color Me Badd were a male R&B vocal group which was formed in Oklahoma City, Oklahoma in 1987. The members were Bryan Abrams, Mark Calderon, Kevin Thornton and Sam Watters. The a cappella, pop, and hip hop outfit, whose R&B harmony vocals were offset by mild rap interjections and a post-New Kids On The Block street dance image, were discovered by Kool & The Gang's Robert Bell in 1990. The group enjoyed 5 U.S. hit singles from their debut album C.M.B. throughout 1991 and 1992. These were "I Wanna Sex You Up" (U.

The a cappella, pop, and hip hop outfit, whose R&B harmony vocals were offset by mild rap interjections and a post-New Kids On The Block street dance image, were discovered by Kool & The Gang's Robert Bell in 1990.

Their debut album, C.M.B. was released in September 1991, eventually selling over 6 million copies worldwide, and being certified 3x platinum in the United States by the RIAA.

Color Me Badd performed at the 1991 Smash Hits Poll Winners Awards in the UK, winning the Best New Group trophy. In January 1992, they were awarded the Favourite Single, Soul/R&B trophy at the 19th annual American Music Awards, held at the Shrine Auditorium, Los Angeles. March 1992 also saw Color Me Badd win the Best R&B / Soul Single, and Song Of The Year, categories at the sixth annual Soul Train Music Awards.

The group released a remix album in October 1992, titled Young, Gifted and Badd. It contained the hit single "Forever Love" (U.S.#15), which was also featured on the Mo' Money soundtrack. However, the album peaked at U.S.#189, which was the first hint of the bubble bursting.

Although some critics gave it positive reviews, the album did not fare well on the Billboard Album Charts, eventually peaking at #56. With the music industry at the time embracing groups such as Nirvana, Guns N' Roses and Pearl Jam, it was difficult for Color Me Badd to deliver the same success on the singles charts as they had done before.

The group re-emerged in 1996 with their fourth album called Now and Forever. However, once again, sales were well below those expected from the group at around 4,000 sales in the U.S. alone. The album produced one major hit single, "The Earth, The Sun, The Rain," which peaked at U.S. #21.

After moving to Epic Records, Color Me Badd's fifth album, Awakening, was released in July 1998. Remaining true to their R&B roots, they again received critical acclaim for their vocal harmonies. "Remember When" achieved minor success on radio and has a companion video shot as well.

In 2011, they reformed as a trio, sans Sam Watters, who is now a successful songwriter and producer.

The Best Of Color Me Badd

Young, Gifted And Badd (The Remixes)

I Wanna Sex You Up (CDS)