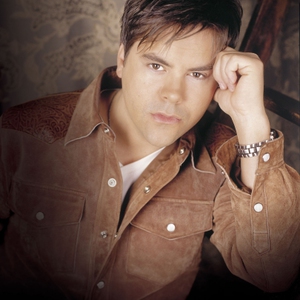 Steve Holy (born February 23, 1972 in Dallas, Texas) is an American country music artist, blending 50's rock and roll, pop and traditional country. Steve sites country greats Charlie Rich, Mickey Gilley and John Conlee as his influences, but is quick to add that Elvis, Sam Cooke, and a variety of Doo-Wop bands play a major role in his vocal style and on-stage persona. In 1997, Steve signed with Curb Records. He launched his debut album Blue Moon in October 2000.

In 1997, Steve signed with Curb Records. He launched his debut album Blue Moon in October 2000. The initial offering, dubbed "5090" by Rack Clark of Dick Clark Productions for its tribute to both the 1950's and 1990's era, included a swing-driven single entitled "Don't Make Me Beg" which was released as Steve's debut single from the album to set his course in motion.

Steve has enjoyed incredible success to jump-start his musical career. His second single from the album, "Blue Moon," featuring more traditional country sounds was released in April 2000 and reached 19 in the charts. His third single, "The Hunger," delivered a pop-folk feel and made it to Number 20; and just eighteen months after the release of the album, Steve's fourth single "Good Morning Beautiful," for which he is most widely recognized, charted at Number 1 for five weeks in 2002. The single was also featured in the Jennifer Lopez movie Angel Eyes.

Steve earned his second number one single with "Brand New Girlfiend." This song was also the number one dance song for 2006.

Steve has had several of his tunes appear on movie soundtracks: