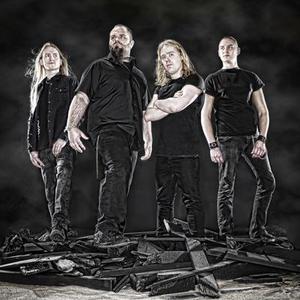 The story begins when 9 year old Tony Westermark heard Kiss for his first time and decided to be a rockstar, no thougths of being anything else. He got his first drumkit when he was twelve and started out with his first band right away. The band introduced him to Metallica and the music blew him away. They played Metallica covers for a couple of years and then got into heavier stuff like Pantera etc. At the age of 15 he discovered Death Metal and got serious about his drumming and started to write music.

Late 2005 Tony Westermark teamed up with young and talented guitarist/composer Anton Svedin, bassplayer Rickard Persson and brutal vocalist Fredrik S?derberg.
SOREPTION was born. Goals were set high from the start and they decided to contact Chris and Tommy Rehn to produce and record 4 songs.Due to the high quality in their music they were instantly offered a
managementdeal with VSP management.

When SOREPTION in their unique surgically razorsharp way brings you technically and artisticly advanced riffs topped with in your face brutal vocals you can do nothing but offer a bow, and a warning, to the older and more established guys in the genre.These twenty-year old guys perform their songs quickly, brutally and highly technical with musicality and finesse. A very unusual combination especially for a band as young as SOREPTION.

The EP "Illuminate the Excessive" is recorded, mixed and produced at Sidelake Studios,Sweden by
Tommy and Chris Rehn from ANGTORIA.Layout and Artwork by Chris Rehn

Monument Of The End