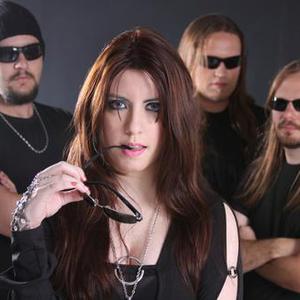 Power, energy, intensity. Shadowside can be defined by their and passion for Rock and courage to take risks and pursue goals and dreams. Featuring Dani Nolden, one of the most unique and strong female voices ever heard and strong musicianship, they combine the four members' influences of Hard Rock, Thrash and Heavy Metal to create songs with strong hooks, heavy guitars, catchy melodies and a vigorous performance with a hint of modern.

Even though the four metallers have different origins (Lithuanian, German, Portuguese and Italian), they were born and raised in Brazil and started activities in 2001 the sunny beach of Santos with the release of an independent EP, followed by a national tour that included opening for bands like Nightwish and Primal Fear.

The hype generated about the band created very high expectations for their official debut full length Theatre of Shadows, released in 2006, an instant national success. They were chosen to support Helloween in their Brazilian tour in 2006. Since then, they have been on the road frequently, having toured Spain twice, USA five times and packed venues in Brazil. Other artists they have performed with are Iron Maiden, Kittie, Divine Heresy, Daath, Temple of Brutality (featuring David Ellefson of Megadeth) and Sepultura.

August 2009 saw the release of Dare to Dream, Shadowside's second album, in Brazil only. The band took a big risk and dared to go for a raw and direct sound. The idea was immediately accepted and embraced by the fans and the album immediately hit position 4 in the Roadie Crew album charts (the most important Brazilian Metal magazine), only below Heaven and Hell, Iron Maiden and Blaze Bayley.
Shadowside is currently being described by the media as ?the best band Brazilian band in activity? (Novo Metal website) and as the band that rescued attitude in Rock music (Roadie Crew Magazine). Dare to Dream also received high praise, being picked album of the year by the vast majority of the press in Brazil, top 3 albums by nearly every website and magazine in the country, voted by readers of the Portuguese magazine Horns Up! as the best Brazilian band and by readers of Roadie Crew as best female singer and top 3 overall, top 3 albums, top 3 bands, top 10 guitarists and top 10 live concerts.

Dare to Dream was released worldwide released in June 2010. The rising stars of the Brazilian Metal and Rock music scenes, Shadowside's last album title reflects what they always knew they should do: Dare to Dream. The band said goodbye to 2010 after an almost 2 months long tour with legendary rock band W.A.S.P. through Europe and entered the studio again in early 2011 to record new material, titled Inner Monster Out produced and mixed by Fredrik Nordstr?m (Arch Enemy, Evergrey, Dimmu Borgir, Bring me the Horizon and many more). The raw energy on all the 11 tracks show a band that are not afraid to try and grow even more mature after every release, despite the young average age ? late 20's ? of the band members.