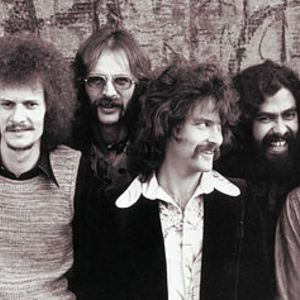 1. Rare Earth is an american rock band affiliated with Motown's Rare Earth record label (which was named after the band) who were particularly famous in the late-1960s and 1970s. The group formed in 1961 as The Sunliners, and, after changing their name to "Rare Earth" were signed to Motown in 1969. The band was the first act signed to a new Motown imprint that would be dedicated to white rock acts. The record company didn't have a name for the new label yet, and the band jokingly suggested Motown call the label "Rare Earth." To the band's surprise, Motown decided to do just that.

The group formed in 1961 as The Sunliners, and, after changing their name to "Rare Earth" were signed to Motown in 1969. The band was the first act signed to a new Motown imprint that would be dedicated to white rock acts. The record company didn't have a name for the new label yet, and the band jokingly suggested Motown call the label "Rare Earth." To the band's surprise, Motown decided to do just that.

Rare Earth had a number of Top Ten hits in the 1970-1971 period, including covers of The Temptations' "(I Know) I'm Losing You" (which was used in the documentary video It's Time) and "Get Ready". The cover of "Get Ready" was their biggest hit, peaking at #4 on the US pop charts, a better performance than the original. They did not chart significantly after 1971, although they continued to record into the 1980s. Their 1973 album Ma, written and produced by Norman Whitfield, is considered their best overall work, and features their version of "Hum Along and Dance".

The group gained a bit of notoriety when it was mentioned dismissively in the lyrics to Gil Scott-Heron's landmark 1970 poem "The Revolution Will Not Be Televised," which included the line, "The theme song [to the revolution] will not be written by Jim Webb, Francis Scott Key, nor sung by Glen Campbell, Tom Jones, Johnny Cash, Engelbert Humperdinck, or the Rare Earth."

Rare Earth, which continues to perform at corporate events and on the oldies circuit, appears to have had the last word, however; bits from their recordings have been used as samples on recordings as diverse as Beck's "Derelict", Black Sheep's "Try Counting Sheep", Peanut Butter Wolf's "Tale of Five Cities", Scarface's "Faith", NWA's "Real N****z Don't Die" and Eric B. and Rakim's "What's Going On". Their hit "I Just Want to Celebrate" was also used in a major national advertising campaign by Ford Motor Company. "Get Ready" was used on the soundtrack to EA Games Battlefield Vietnam.


2. Rare Earth began as an R&B band called the Sunliners in Detroit in 1961. Of the musicians who would be part of the band dubbed Rare Earth, only sax player Gil Bridges and drummer Pete Rivera were present. John Parrish joined on bass in 1962. Rod Richards became a guitarist with the group in 1966. Keyboardist Kenny James came into the fold the same year. After years of doing the club circuit, the group changed their name to Rare Earth and released Dreams/Answers on Verve. The album received little reaction and the group was picked up by Motown Records as the first act on their yet-to-be-named new label. Rare Earth suggested to Motown that the label name their new subsidiary after the band and Rare Earth Records was born.

When they set out to record their first album, they essentially ran out of material and did a 21-minute rendition of the Temptation's "Get Ready" to fill out the space. The album was making no headway on the charts for a long period of time. So they took the first three minutes of "Get Ready," released it as a single and it made its way into the U.S. Top Ten list, peaking at number four. Pulled along by the success of the single, the album also began to sell, breaking the Top 20, and Rare Earth's career was officially on its way. The second album, Ecology, was released in June of 1970, a couple months short of a year after "Get Ready" had been put out. Interestingly enough, Ecology was not really the group's second album, but their third. An album entitled Generation was recorded as the soundtrack to the film of the same name. When the film stalled at the box office, the album was shelved. Still, Ecology would yield not one, but two hit singles. The first was "(I Know) I'm Losing You" (another Temptations cover), which also broke the Top Ten. The second single, "Born to Wander," did not fare quite so well, but did make the Top 20. The album was catapulted to number 15.

Not wanting to lose momentum, One World followed almost exactly a year after Ecology, and yielded another hit single in a longtime classic, "I Just Want to Celebrate." The song peaked on the pop charts at number seven and the album broke the Top 50. They released a live album in December of the same year. For the next album, Willie Remembers, the group insisted on doing all originals, a move that was not common around the Motown camp. Unfortunately, for a band trying to prove a point, the album never reached the type of sales of previous records. Indeed, it stalled out at number 90, and the single "Good Time Sally" didn't even break the Top 50.

Motown tightened the creative grip on the group and original producer Norman Whitfield, who had worked with the group on earlier albums, was brought in to save the day. The resulting album, Ma, was released in May of 1973 and fared just a little better than Willie Remembers, peaking at number 65. The label was not pleased and sent the group into the studio to record with Stevie Wonder. That pairing did not really gel, though, and only two tracks were recorded, neither of which were released. Instead, the label sought to release another live album, trying to regain the spark that Rare Earth had had. That project also fell by the wayside, though.

What followed was a series of lineup changes and legal battles, and the group stopped touring altogether in 1974. The following year Rare Earth, in a new lineup, released Back to Earth. The album did a bit better than the previous one, reaching number 59 on the charts. The single, appropriately entitled "It Makes You Happy (But It Ain't Gonna Last Too Long)" stalled just outside the Top 100. A disco-oriented excursion entitled Midnight Lady was released in 1976, but failed to really go anywhere. To make matters worse, Rare Earth Records was discontinued altogether. The band had broken up by this time.

As fate would have it, though, this was not the end of Rare Earth. Instead, Barney Ales, who had presided over Rare Earth Records, started his own label Prodigal Records. He talked the group into reuniting to record the label debut. The resulting album, Rare Earth, was released in 1977 and made no real waves in the music business. Rare Earth got things together again for a marathon recording session the following year. That session yielded not one, but two albums. The first was Band Together, released in April of 1978, with Grand Slam following in September. Neither of those albums every really took off, either. The group essentially broke up in 1978, although a version of the original lineup was touring all the way into 1983. A different incarnation of the group, with just two original members, still makes the circuits.

Back To Earth & Rare Earth

Made In Switzerland (Vinyl)