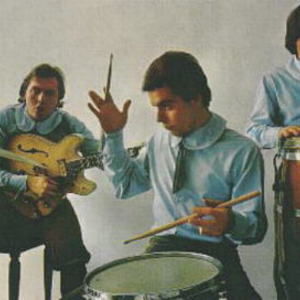 The Young Rascals aka The Rascals (the group dropped the "Young" from their name in early 1968 while continuing their streak of hits) were an American soul and rock group of the 1960s. Felix Cavaliere (keyboard, vocals), Gene Cornish (guitar), Dino Danelli (drums) and Eddie Brigati (vocals) formed the band in New York City. Three-quarters of the group - Felix, Gene, and Eddie - had previously been members of Joey Dee and the Starliters.

Felix Cavaliere (keyboard, vocals), Gene Cornish (guitar), Dino Danelli (drums) and Eddie Brigati (vocals) formed the band in New York City. Three-quarters of the group - Felix, Gene, and Eddie - had previously been members of Joey Dee and the Starliters. Eddie's brother, David Brigati, another former Starliter, arranged the vocal harmonies and sang backgrounds on many of the group's recordings (informally earning the designation as the Fifth Rascal). When Atlantic Records signed them, they discovered that they already had another obscure group named the Rascals on the payroll. They decided to rename the group the Young Rascals.

Their first minor hit was "I Ain't Gonna Eat Out My Heart Anymore" (1965), followed by the #1 single "Good Lovin'" (1966, originally by the Olympics). Soon the band began to mature as songwriters and released other hit songs written themselves, including the hit "Groovin'" (1967), "It's Wonderful", "How Can I Be Sure" (which got to #1 in the UK when covered by David Cassidy), and "A Beautiful Morning" (1968).

In 1970, Eddie Brigati left the group, followed by Cornish in 1971. The last album with them as active members was Search & Nearness, which featured Eddie singing lead on the Cornish-penned You Don't Know and their cover of The Box Tops hit The Letter. The only single release from the album was the spiritually-themed Glory, Glory(#57 in the US), with backing vocals by The Sweet Inspirations. Cavaliere and Danelli released two more albums as The Rascals, Peaceful World and The Island Of Real, using other musicians and singers. They disbanded in 1972.

Cavaliere released several solo albums throughout the 1970s. Brigati, with his brother David, released "Lost in the Wilderness" in 1976. Cornish and Danelli worked together in other groups, including Bulldog and Fotomaker. In 1982, Cavaliere and Danelli joined Steve Van Zandt in Little Steven and the Disciples of Soul.

The (Young) Rascals were inducted into the Rock and Roll Hall of Fame in 1997.