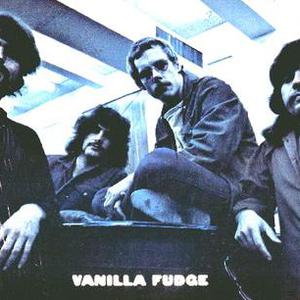 Vanilla Fudge is an American psychedelic rock band that recorded albums from 1967 to 1970. They reunited in 1999. Members included organist Mark Stein, bassist Tim Bogert, lead guitarist Vince Martell, and drummer Carmine Appice. They have a number of hit singles, their biggest hit being "You Keep Me Hangin' On," a slowed-down, trippy, hard rock cover of a song originally recorded by The Supremes, which particularly featured Appice's energetic drumming.

They have a number of hit singles, their biggest hit being "You Keep Me Hangin' On," a slowed-down, trippy, hard rock cover of a song originally recorded by The Supremes, which particularly featured Appice's energetic drumming. One follow-up to this hit, "Take Me For a Little While," was an original composition with a very similar sound both in musical themes and treatment, but it said something quite different than its forerunner. While it did not do nearly as well commercially, it did attract some airplay, making it a rare instance of a band successfully parodying their own work.

The members of Vanilla Fudge were great admirers of The Beatles, and covered several of their songs including "Ticket To Ride," their version of which The Beatles were quite fond.

Vinnie Martel was invited to play with Jimi Hendrix, but Hendrix died a month later.
Bogert & Appice also played with jazz/rock guitarist Jeff Beck on their self-titled album in 1973. (Beck replaced Eric Clapton in the Yardbirds in the late 1960s.)

Stein and Appice revived the band in 1984, to very minor success. The band has not recorded but played some concerts since. A live concert recorded in Chicago in 1987 has been released recently. Carmin Appice also played with Rod Stewart as a background vocalist.

Mark Stein played with Boomerang and Alice Cooper.
Mark Stein is currently (2006) touring as Vanilla Fudge, and they will be inducted into the Long Island Music Hall of Fame this October with Billy Joel and Joan Jett.

Out Through the In Door