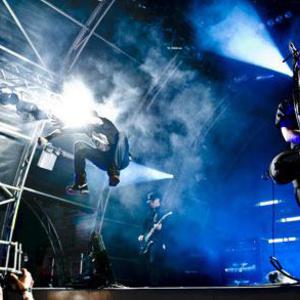 There is more than one artist with this name. 1. The most recent was a drum'n'bass-influenced electronic rock group from Perth, Australia, who relocated to the UK in 2003. The group (2002) comprises Rob Swire (vocals/synth/producer), Gareth McGrillen (bass guitar/producer/DJ), Perry ap Gwynedd (guitar), Paul 'El Hornet' Harding (DJ), KJ Sawka (drums) and Ben 'The Verse' Mount (MC). In 2012 they broke up, however El Hornet and MC Verse still use the name Pendulum for DJ sets.

1. The most recent was a drum'n'bass-influenced electronic rock group from Perth, Australia, who relocated to the UK in 2003. The group (2002) comprises Rob Swire (vocals/synth/producer), Gareth McGrillen (bass guitar/producer/DJ), Perry ap Gwynedd (guitar), Paul 'El Hornet' Harding (DJ), KJ Sawka (drums) and Ben 'The Verse' Mount (MC). In 2012 they broke up, however El Hornet and MC Verse still use the name Pendulum for DJ sets.

In 2005 they released their debut album, Hold Your Colour. Critically, the album was well-received in both the United Kingdom and Australia. In addition, it was one of the biggest selling Drum and Bass releases of all time. Pendulum have also collaborated with Freestylers, releasing the single "Fasten Your Seatbelt". MC $pyda and DJ Tenor Fly also feature as vocalists on "Tarantula".

Pendulum's sound is typically heavy beats accompanied by low, buzzing bass lines, overlaid with synthesized leads. As of their second album, In Silico, further experiments with sound are evident with many more elements from rock and typical electronic music being incorporated into their music. "In Silico" is Pendulum's first album for Warner Bros. Records via the bands Ear Storm imprint.

Their track "Vault" was played by almost every DJ and was declared by annual Knowledge Drum'n'bass Awards as The Best Track of the Year. They have also created many remixes, including a remix of Voodoo People by The Prodigy.

The band's third album "Immersion" was released on 24th May 2010, entering the UK album charts at #1 at the end of that week.

On June 19th Rob Swire announced "There will be no further Pendulum live shows. There are no current plans for a new album in 2013." via his twitter.

This band is Called ((Knife Party)) and it's very popular in Electronic Dance Music Scene Nowadays.

2. A black metal band from France. Their debut album Les Fragments du Chaos was released in 2012 by Hass Weg Productions.

3. A group from Melbourne who were distributed by Viscous Vinyl and Mds, both labels also based in Melbourne. They released one album called "3 Knocks" which featured the track "Coma" for which an ARIA Music Award was won for "Best Dance Release" in 1997.

4. There is also a Trip-hop group from the UK going by the name who released an album titled "Creature Feature" in 1997 on Cup of Tea Records.

5. Pendulum was a Belgian band, founded by Serge Demol. Their debut single was called "It's a Beautiful Day". It was released in 1970 and became a hit. Two more singles were released in 1971 and 1974, but weren't successful.

6. Justin Wolthers, from Australia. One of the legendary Bloody Fist Records early members producing hardcore-techno and doomcore. Also goes under the alias De-Koder.

7. Pendulum was progressive rock from Indonesia. The first album release in 2003, Hypnotize, by taking the listener from chunky guitar solos onto light riffs and inspirational lyrics. With only one song featuring vocals (Ulah Manusia feat. Ipang), these four former music students build on a chemistry developed over years at school and playing in various bands based in Jakarta. Their speed and precision stand out on each track without robbing the music of its soul.

Their album can reach at:
http://www.equinoxdmd.com/pendulum/default.htm

Nothing For Free (CDS)

Driver & Nothing For Free (CDS)