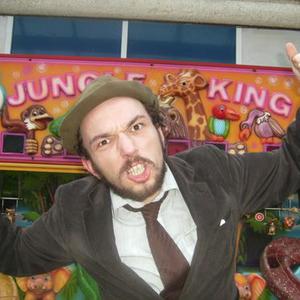 Shitmat is the performing name of Henry Collins, a breakcore artist from Brighton, UK. His music is largely based around the Amen break, Gabber, Plunderphonics, jungle and drum 'n' bass. Like other similar breakcore acts, Shitmat is something of a crossover artist with people who are not normally associated with breakcore and other genres of electronic music, such as heavy metal fans. His music, sometimes referred to as "mashcore", is known for the humorous use of samples atypical of serious drum and bass artists and deliberate use of clich?s.

His music, sometimes referred to as "mashcore", is known for the humorous use of samples atypical of serious drum and bass artists and deliberate use of clich?s. Since 2004 Shitmat has released 8 EPs and 6 studio albums shared between Planet Mu and wrong music. His 2nd album ?Full English Breakfest' captured the imagination and mood of the then emerging breakcore / mashup scene, mixing up jungle blast beats, gabber influences and Ragga Vocals."Agricultural Ardcore" from Full English Breakfest, Volume 5 is based around the theme tune to the UK radio soap opera The Archers. The Killababylonkutz EP is an album playing on clich?s within the ragga-jungle scene, in which every single track is based on the same ragga sample. The Lesser Spotted Burberry EP is a tongue-in-cheek play on the UK's Chav subculture and makes references to brands such as Burberry and Argos that are often associated with it. During live performances, Shitmat himself often performs wearing a Burberry Baseball Cap, further reinforcing the parody.

He is also one of the co-founders of Wrong Music. A collective/record label based in Brighton, UK.

One Foot In The Rave