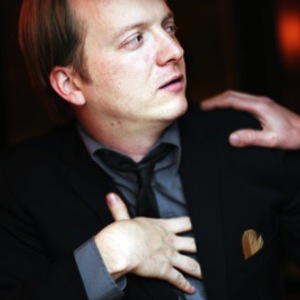 Nick Jaina is a singer-songwriter, born in Sacramento, California; now residing in Portland, Oregon. He is signed to Hush Records and has released several albums through the label, and has also toured extensively with a rotating cast of talented bandmates shared with local bands like Horse Feathers, the Maybe Happening, and Laura Gibson. Nick is also a part-time member of Portland indie ensemble Loch Lomond.

He is a member of the rock band Binary Dolls, where he plays the Fender Rhodes and sings rock-type songs. On his own, he plays guitar and piano and sings yet more songs. He is lucky enough to have the cream of Portland's musical community play in his "solo" band, which has now grown to a revolving cast of perhaps ten or so people. Nick Jaina is also a producer, with projects including Heroes & Villains debut album, "Turn Your Swords"; Gill Landry's debut record on Nettwerk Records, titled "The Ballad of Lawless Soirez". In the past, Nick has played drums for the Be Good Tanyas, lead guitar in Myshkin's Ruby Warblers, and for about a week he played a bit of keyboard in Lackthereof. He designs posters for certain shows around Portland, including those at the great venue called Doug Fir Lounge. He wrote a jazz opera in 1998 called "The Hole in the Coffin" about a funeral parade in New Orleans.

The Beanstalks That Have Brought Us Here Are Gone

The Bluff of All Time