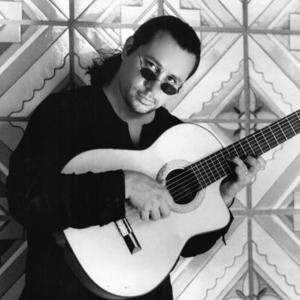 Luis Villegas is a first-generation Mexican-American born in East Los Angeles, CA and is now an Internationally-renowned guitarist. A self-taught guitarist who plays flamenco, jazz, rock, blues and classical, he grew up listening to traditional Mexican Ranchero music. As a boy, he met the famous Mexican Ranchero singer, Vicente Fernandez, and listened to traditional Mexican ballads. It was not Mexican music, however, that attracted him to the guitar but rock and roll since the heavy metal explosion was in full swing in Los Angeles.

Luis played in rock bands all through High School and into college garnering some mild success with the band Slumlord in 1988 and 1989 fronted by Scott Kidd who later went on to become a famous radio DJ known as Uncle Scotty. Luis quit Slumlord in 1990 when he found he'd hit a wall in his appreciation for rock music and needed a different stimulus to fuel his musical visions.
That new vision began to grow when he picked up the acoustic guitar and started experimenting with classical, jazz, and even flamenco music. Being self-taught, he emulated guitarists from the records he listened to. Many of his current techniques are based on flamenco guitar techniques such as rasgueado, alzapua and picado.

He practiced intensely, concentrating on the incredible techniques that would garner him so many accolades. Those techniques and the music he heard inside himself, was channeled through an instrument from his youth: the Spanish guitar.

In 1991, he recorded a demo of original material in a style that was very new to American audiences. This new style was being made popular at the time by artists such as The Gipsy Kings, and Strunz and Farah.

Luis then formed a band to play some of this new material. The band, which originally consisted of friends from rock bands he had played with, formed a huge following in the Los Angeles area.
Luis is currently in the studio working on his 5th CD due out in 2008. The new CD, under the working title, The New Brown Sound, is scheduled for release by the end of the year and is being produced by George Benson's musical director David Garfield. Drummer Gregg Bissonette makes a return appearance on this release. "This CD is a departure for me," Villegas explains. "I've evolved from a Nuevo Flamenco sound into a sound reminiscent of the ?brown sound? that had its roots in my old neighborhood of East LA and was made popular by bands like War, Tierra, and El Chicano. The best way to describe it is to say it's jazz mixed with rock and Latin rhythms. But with a modern edge."

Luis resides in Los Angeles, CA with his wife and two children. He is currently teaching guitar at Santa Monica High School for Santa Monica College.

On December 21, 2007, Luis was featured in an interview with Val Zavala and performed with several of his band members on the PBS television show ?Life and Times.?