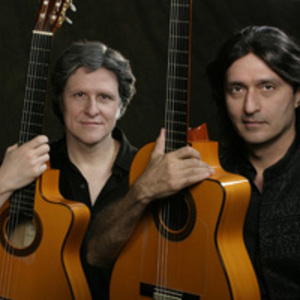 Strunz & Farah is a virtuoso guitar duo with an eclectic sound that could be described as a cross between world fusion and flamenco. Jorge Strunz, born in Costa Rica, and Ardeshir Farah, hailing from Iran, met in the United States in 1979. Having both played guitar professionally since their early teens, they soon teamed up and released their first album, the self-produced Mosaico, in 1980. Since then they have played on numerous recordings together, releasing several albums as a duo and collaborating with the likes of Rub?n Blades and L.

Subramaniam. Jorge Strunz was once recommended by friend Paco de Luc?a as a replacement for Al Di Meola in The Guitar Trio.

More Biographical detail on the Strunz and Farah website

Journey Around The Sun