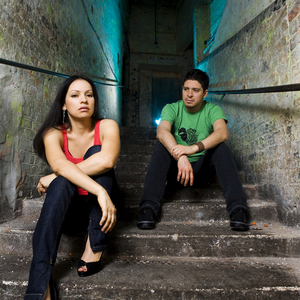 Rodrigo Sanchez and Gabriela Quintero are two fast-fingered Mexicans with a unique sound created on acoustic guitars. Their music is difficult to define, straddling both world and rock and often imbued with timeless Hispano ? classical influences. The fire in their music comes from their life-long passion for metal music. In spring 2006, ?Rodrigo y Gabriela,? beat both the Arctic Monkeys AND Johnny Cash to number one in the Irish charts. Both the artists and their third self?titled album have gone on to enjoy international success since its initial release in early 2006.

Rodrigo is a deft finger-picker who can move from raging speed to sensual soul in the space of a fret, while Gabriela employs fast, rhythmic techniques. Her percussionist's thrashing of strings and drumming of the instrument's body inevitably raises comparisons with the flamenco style of rumba, but the band specifically denies a flamenco influence. Nonetheless, it is often referred to as "nuevo flamenco", symbolising a sort of renaissance of the traditionally Spanish music genre whose origins began in the Middle East when the Moors brought their cultural music to Europe. The duo's repertoire flies beyond familiar latin folk guitarists' styles because of the metal connection: their reworkings of Led Zeppelin's ?Stairway to Heaven? and Metallica's ?Orion? are musts, and the presence on ?Ixtapa? of the fiery hungarian gypsy violinist Roby Lakatos is inspirational.

The Story:
Rodrigo and Gabriela met as teenagers, at the Casa de Cultura (House of Culture), in Mexico City, where Rodrigo's brother was Director. Rodrigo was playing drums in his band Castlow - a code word he never revealed to Gabriela, and changed to Tierra Acida (Acid Earth) when she joined them on guitar. The couple drifted together through music; teenaged metal fanatics who both failed entrance to the Conservatory and moved into rock. Before joining Tierra Acida, Gabriela ran three girls' bands, Las Brujas (The Witches), Subterraneo and Las Formigas (The Ants) at once: Terra Acida had a disciplined work ethic: ?It was mental!? she recalls, ?we rehearsed five hours a day, every day, with very short breaks, and not much talking!?

Tierra Acida played in Mexico City's roughest clubs and lived off day-jobs (Gabriela taught Metallica riffs to local kids; Rodrigo at a TV station, doing music for programmes). They recorded an album but wouldn't sign the record contract, planning instead to concentrate on learning more guitar styles. In fact, they just hung out with friends and survived by playing bossa novas in the hotel bars. ?Then we decided to travel to Europe?.

Their first port of call was Dublin, Ireland. ?It was the most unknown place to us?, explains Gabriela, the talkative one. ?Also, a Mexican girl offered us her house there.? They landed in Dublin at night, spoke no English, and had $1,000 between them. They found a note on the door saying actually, sorry, but they couldn't stay there after all, so the taxi driver drove them round hostels and hotels all night. Eventually they rented a place - and soon the money disappeared: ?So - we had to busk?. That was 1999: ?We were very exotic specimens!? They built a reputation and landed gigs in people's homes, at wedding parties and gallery openings, playing covers and their own compositions, ?We still wanted to be metal composers, but everything came out as Latin!?

Dublin was booming then, with new music venues and galleries and a thriving rock scene, and the two Mexicans jammed with local folk musicians in the bars. In winter, they moved to Denmark and started again - this time busking at minus three degrees! The brief Copenhagen experience inspired two numbers on the current album, ?Diablo Rojo?, a scary roller-coaster ride in the city, and ?Viking Man?, their nickname for a homeless man they befriended, who pushed them into busking on the freezing streets.

Next, they hit Barcelona, but this time, the club owners assumed they played mariachi, and wouldn't let them play in their own unique style, so Rod & Gab ended up jamming on Barca's main drag Las Ramblas getting heavy duty hassle from the Catalan cops. Just in time, a call came from Ireland to come back and play the newly opened Sugar Club. Damian Rice, then a busking friend, invited them to support his shows, and in 2003, they released ?re-Foc?, and a year later, ?Live Manchester And Dublin,? which both launched them onto the world music circuit ? and beyond.

The Music:
Rodrigo and Gabriela describe their style as ?fusion music': ?It's mainly got latin harmonies and rhythms but the structure is rock. It's not jazz because it's structured, and we don't improvise; our solos are exactly what's on the record, as a metal fan and guitarist you always want to hear the same f**king solo!?

Influences range from family salsa records to Gabriela's aunt's pink floyd, black sabbath, queen, and led zeppelin vinyl, with Rodrigo also embracing a similar classic rock lineage. But crucially they grew up during Mexico's ?metal era.' ?People expected two acoustic guitarists would play classical music, but we dropped in extracts from Led Zep, Hendrix and Metallica, then we did the same with ?Stairway to Heaven!? Their music is instrumental ?with very lyrical themes.?

Mentions of flamenco influences raise sharp responses: ?To many music fans, it sounds like flamenco, and we're great flamenco fans, but we don't play it? says Gabriela. ?The only similarity is that our music is guitar music and it's very rhythmic.?

This album's producer John Leckie (Radiohead, Muse, My Morning Jacket) arrived on the scene via a demo sent to him by their Irish record label, and he called the very next day. The three agreed to record ?live', and Rodrigo and Gabriela were placed in the same room in a studio in Bath, England, to perform as if on stage: ?We played each track over and over, and only ?Orion' has overdubs.? Roby Lakatos, the fiery gypsy violinist was the only outsider, and his presence on ?Ixtapa? is wonderful. ?We saw him on TV?, Gabriela remembers, ?Playing at a concert in Amsterdam, and we sent him our music. He improvised this whole piece in two hours!? From the many, many live versions, Leckie chose ?the one.'

The Touring
The global success of ?Rodrigo y Gabriela' (300,000 worldwide sales and counting) has been spurred on by Rod & Gab's dedication to hard work on the road. 2006 saw three UK tours and three US tours, plus extensive European and Australian sojourns. 2007 has seen them back in the United States (once Rodrigo's visa problems were sorted out by the State Department) and the UK for many more shows, including festival spots at Coachella, Glastonbury, V, Bonnaroo, Oxegen (Ireland), Latitude, Pukkelpop (Belgium), Lowlands (The Netherlands) and countless others. For Rodrigo y Gabriela, the road really does go on forever.

The Album ? track by track
The sleeve photo of a crocodile's eye with a faint image of Rodrigo and Gabriela superimposed, suits the artists' desire for something which didn't shout ?Mexican guitarists? or ?Couples.? ?It reminded us of Tamacun, the famous Mexican eccentric who is in Ixtapa where we lived for a while?.

Tamacun ??Tamacun's message is to teach kids to respect nature.? He handles crocodiles, and tourists come to photograph him.

Diablo Rojo ? Inspired by a wild rollercoaster called ?Red Devil' at a theme park in Copenhagen, Denmark. Three rides in a row, each.

Viking Man ? Another Danish inspired piece. The Viking Man was a homeless guy who encouraged Rod & Gab to tough it out on the streets, busking in minus zero conditions at Christmastime. John Leckie adds radio static.

Satori ? Experiencing self doubt shortly after arriving in Ireland, Rodrigo y Gabriela were at a low ebb. No money, poor English and a deep sense of uncertainty. Only an unshakeable faith in perseverance kept them going. Satori describes the Zen ? like moment of enlightenment they felt when they came through the storm.

Stairway to Heaven - ?Ixtapa was our very own Stairway to Heaven!? Rod & Gab's take was initially inspired by Stanley Jordan's interpretation of the Led Zep warhorse. Growing from snippets in their live show, their unique version is at once both respectful and innovative.

Orion ? This epic reworking of the Metallica song is the second time Rodrigo y Gabriela have covered Messrs Hetfield, Ulrich & Co: ?A tribute to the style of music we love, it's what kept us playing the guitar through all those Spinal Tap years?

Juan Loco ? The first attempt at recording this album in Mexico in Summer 2005 resulted in three weeks of sunbathing, beer drinking and power cuts. Enter Mr John Leckie, legendary producer of Radiohead, The Stone Roses and Muse, to name but a few; to midwife Rod & Gab's musical vision into what you hear today. ?Juan Loco' (?Mad John') is their Mexican nickname for Mr Leckie.

PPA: ?The first P of PPA stands for Pinche, a Mexican term meaning f**king asshole. This is for all the people in the music business who think they know what's going on but actually don't have a clue?.